Students Brave the Cold in World’s Big Sleep Out 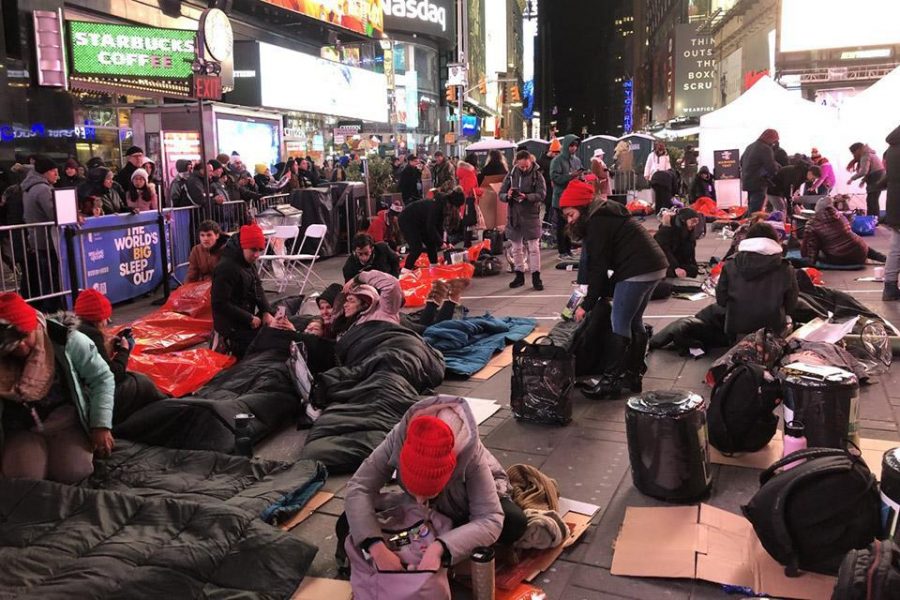 Members from the St. John’s community joined other global citizens everywhere in being a part of The World’s Big Sleep Out on Saturday, December 7th to highlight the dire displacement situation the world has at hand.

Supported by St. John’s Office of Campus Ministry, approximately 25 students from the St. John’s campus took part in the sleep out in Times Square. According to ABC 7 NY, there were about 900 participants who faced the chilling temperatures and brisk weather. 100 percent of the funds raised during the event are for charities that provide aid and security to the homeless and displaced people in need; half of these receiving charities are located in the greater New York area while the other half of funds is given globally. At the Sleep Out in Times Square, actor Will Smith was among many performers and speakers who sought to bring more media attention to the housing and humanitarian crisis of today.

According to The Bowery Mission, there are more New Yorkers affected by homelessness today than ever before. Multiple sources such as the New York Times and THE CITY have reported that one out of a hundred New Yorkers live vulnerably on the streets or in crowded, poorly maintained and overcrowded shelters. The number of people experiencing homelessness has risen from 42,190 in 2014 to 67,170 in 2018; this data does not include people being assisted through The Bowery Mission’s programs.

Following the sleep out event, students reflected on how the sleep out affected their world view and understanding of homelessness.

“Homelessness does not discriminate—it can take a hold of anyone, anywhere,” Sophomore Logan Aquino said. He added that “…the World’s Big Sleep Out provides a tremendous platform to raise awareness of the issue,” and diverts the focus of our daily conversations to helping those in need.

Sydney Iseminger, a sophomore majoring in anthropology and theology, disclosed her own takeaways from the event. “As the night drew on, it became overwhelmingly cold— both physically and mentally,” affirming the 20 degree biting conditions of that night. “Due to a lack of sleep and the poor conditions, my body felt like it was shutting down,” Iseminger said. “While I still cannot grasp the suffering the homeless face, I can change the way I regard homelessness and demand the policy changes needed to end the displacement of millions of people sleeping on the street.”

Beyond New York, students at the St. John’s Paris campus also engaged in the effort. “Participating in the Sleep Out was important to me, as I have seen many homeless people on the streets of New York and Paris,” Student Špela Kunstelj said. Kunstelj, though uncomfortable that night, stated that while she has the ability to choose to participate, “the homeless have none.”

The campaign was originally founded by Josh Littlejohn in Scotland and continues to grow through their partnerships with the Institute for Global Homelessness, UNICEF USA and other foundations. The World’s Big Sleep Out aimed to raise $50 million to help displaced people all around the world, with 60,000 global citizens getting involved in the events.

The World’s Big Sleep Out is currently planning more events for this upcoming year, 2020, and hope to direct the world’s attention to getting more materials, assistance, and shelter for the homeless and displaced people in hopes of changing this world for the better.