This is the first case in the SJU community 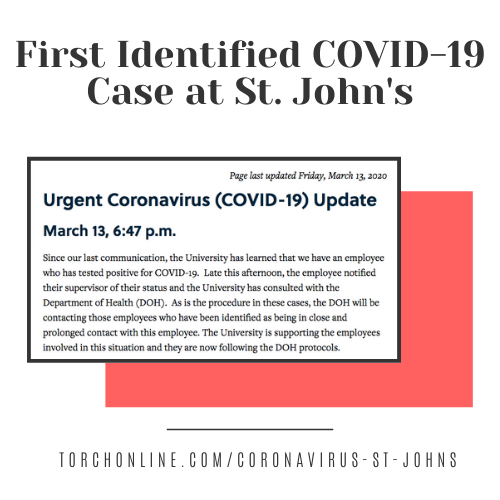 A St. John’s University employee has tested positive for COVID-19, per an email to the University community from President Conrado Gempesaw on Friday. “Late this afternoon, the employee notified their supervisor of their status and the University has consulted with the Department of Health (DOH),” the email says. Until March 9, there were no identified cases within the St. John’s community. This marks the first.

As a precaution, the University announced that the Queens campus will be closed March 16 and 17 (except to essential personnel), indicating that the case may be linked to the Queens campus. The University will also be contacting employees who have been identified as close with the affected employee. They will also have an outside company deep-clean and sanitize the “necessary areas on campus.” The University declined to comment beyond the public statement, citing employee and DOH guidelines.

The announcement comes four days after the University announced via internal communication that resident students must evacuate, and in-person classes were suspended until March 27. The University also notified the community via Public Safety communications (text and phone call) to check their email. Each update is posted on this page of the SJU website as soon as it is announced.