With the unprecedented unravel of an unseen disrupter in society, Bernie Sanders and Joe Biden make their case as to why they should be earning America’s vote for the Democratic Nomination. 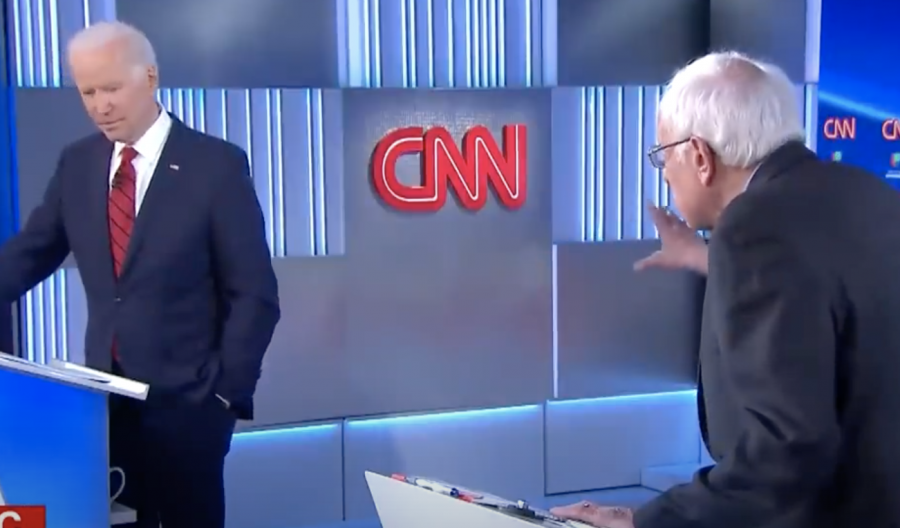 Former Vice President Joe Biden first discussed the coronavirus outbreak by denouncing President Trump’s management of the situation in an op-ed article on USA Today. Biden said, “Trump’s demonstrated failures of judgment and his repeated rejection of science make him the worst possible person to lead our country through a global health challenge.”

Senator Bernie Sanders took to Twitter on Feb. 26 to offer his own rebuke saying, “ I am deeply concerned not just by the rise of cases of coronavirus worldwide, but by the inadequate and incompetent response we have seen from Donald Trump and his administration.” In a series of threads, he stated that a vaccine would be made readily available for everyone under his Medicare For All plan. He followed Biden’s move in writing an op-ed published on Mar. 5 chastising the president saying, “President Trump’s response to the coronavirus has been incompetent, political and reckless.”

The two candidates have been neck-and-neck ever since Biden nabbed the most delegates on Super Tuesday. The growing concerns over the coronavirus pushed both campaigns to cancel rallies in Ohio, Florida and Arizona.

On Mar. 12, Biden and Sanders delivered their latest responses to the outbreak during respective press conferences. It was the first time either candidate addressed the public vocally, laying out how they would respond to the crisis if they were commander in chief.

Biden said, “Our offer is a roadmap not for what I would do as president ten months from now but for the leadership I believe is required at the moment.” A key part of his plan is letting public health professionals be the ones to make public health decisions. He also said that the whole population should have access to mobile testing sites and drive-through centers to speed up testing, highlighting that the current administration should work with FEMA to provide beds and supplies to meet the demands in hospitals.

He further emphasized the need for more accurate reporting of the number of people infected through cooperation on both the states and federal levels. Biden noted a need for clear guidance from the federal government to help local governments make decisions on whether to pursue stricter policies (such as what has happened in many states with the closing of schools).

He also mentioned the need for accelerating the development of a vaccine by speeding testing trials and cultivating resources to make sure those tests meet human safety standards. The vaccine would be free of charge to everyone. He called for the office of the National Security Council Directorate for Global Health Security and Biodefense to be reinstated and the creation of a state and local emergency fund to alleviate the economic toll this situation is having on working-class citizens.

On the international scale, Biden claimed a need for a collaborative response among nations in the world to detect and mitigate the spread of infectious diseases. Biden closed his speech saying, “When I’m president, we will be better prepared, respond better and recover better. We’ll lead with science. We’ll listen to the experts. We’ll heed their advice and we’ll build American leadership and rebuild it to rally the world to meet global threats that we are likely to face again.”

Senator Bernie Sanders spoke in his home state of Vermont calling for solidarity during this crisis.  He emphasized that the government, society, businesses and citizens bear the responsibility to combat the spread. Sanders also took a jab at President Trump’s response to the outbreak saying, “unfortunately, in this time of international crisis, it is clear to me, at least, that we have an administration that is largely incompetent, and whose incompetence and recklessness have threatened the lives of many, many people in our country.”

Like Biden, Sanders took this opportunity to reveal his plan of action. He said he would first declare a national emergency and invoke a bipartisan agreement to direct a response based on science and facts. The cooperation extends to the public and private sector by arranging for “national and state hotlines staffed with well-trained people who have the best information available.”

Like Biden, Sanders also noted a need for expedited testing and responded to the shortage of supplies and equipment needed in hospitals and the medical community. He underscored the state of the healthcare system and the need for more medical professionals,  urging the pharmaceutical industry not to engage in price gouging or profiteering from the medicines being utilized for the crisis as they would be sold at no cost under his administration.

On the economic front, Sanders urged relief for low and working-class citizens rather than for the affluent. He said, “instead of providing more tax breaks to the top 1% in large corporations, we need to provide economic assistance to the elderly.” For those who risk losing their jobs, Sanders called for emergency unemployment assistance. Sanders also said programs such as Meals on Wheels, school lunch programs and SNAP need to be expanded to help those more vulnerable.

To prevent home losses, he would place a suspension on evictions, foreclosures and utility shutoffs. The homeless, domestic violence survivors and displaced college students would be welcomed in emergency homeless shelters. As a means to help small businesses, he called for emergency lending funds for payrolls and building manufacturing establishments to help produce emergency supplies.

“Here is the bottom line, and that bottom line is that in the midst of this unprecedented moment, we need to listen to the scientists, to the researchers, to the medical folks, not to politicians,” Sanders said in the closing of his speech. Though his campaign is currently suspended, Sanders is still eligible for votes in the primaries alongside Biden.

“We need an emergency response to the current emergency …  We need more doctors and nurses in underserved areas. We need to make sure that workers who lose their jobs in this crisis receive the unemployment assistance they need. And in this moment, we need to make sure that in the future, after this crisis is behind us, we build a healthcare system that makes sure that every person in this country is guaranteed the healthcare that they need.”