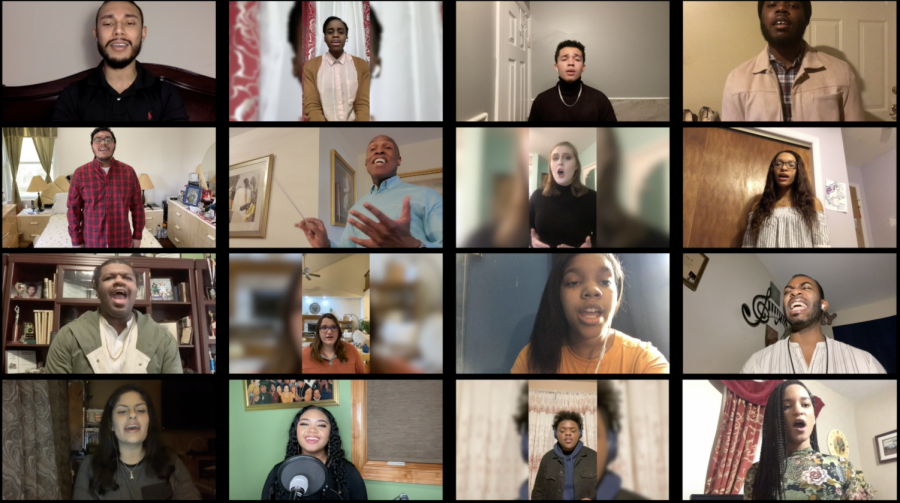 Performing Arts organizations on campus have powered through some incredible obstacles during the pandemic, in which groups and gatherings have been limited to 10 people; a difficult task for groups that are comprised of 40 members. St. John’s official gospel choir, Voices of Victory, is one of these groups.

Directed by award-winning conductor Nigel W. Gretton, Voices of Victory has adjusted to the new standards of “normalcy” within their organization. The choir has switched over to virtual alternatives of auditions, rehearsals, meetings and concert preparation during this time.

Voices of Victory previously prided themselves on their success in curating a number of features in metro-wide concerts and showcases in the Little Theatre. The gospel choir has long been a force of goodwill on campus, as it spreads joy with stellar vocal performances.

“[I] definitely miss connecting with audiences,” Gretton told the Torch in a phone interview. “With art, you really understand the human condition of needing to connect with people in-person, so that part of it has not been good. You miss seeing people.”

“Voices of Victory has typically done around 30 performances a year both on and off campus and so that’s of course way down,” he continued. “But there’s been other ways where we’ve been able to appear in places virtually.”

Though facing incredible difficulties in keeping up with members and the challenging aspects of maintaining an online presence, the virtual transition for Voices of Victory has allowed for new ventures into the technical aspect of musical conduction. The process itself requires more than 50 hours of production using recorded samples of the choir.  The tremendous amount of preparation needed for upholding a group that is used to performing live has been taken head-on by Gretton and his team with crash courses in video production.

“It’s very painstaking, but despite all of that, we’ve all learned new techniques around managing the technology and we still have the ability to do what we’re passionate about doing,” Gretton said.

Voices of Victory faced challenges early on when it was asked to be featured in the first virtual graduation ceremony last spring — right when pandemic life had first started to sink in. The song, “Jehovah Sabaoth” (“God of Angel Armies”) written by Donald Lawrence, was sung by the choir for the 2020 graduating class and was sought to inspire and lift up the spirits of those present. It served as a true testament to what Voices of Victory has always been driven by — compassion and joy, according to Gretton. Though the performance was limited to a virtual showcase instead of the exuberating feel of live vocals, Gretton was able to manage the balance of recorded tenors, bass, sopranos, altos and mezzos through rigorous technical work.

Prior to last spring, in-person rehearsals and face-to-face musical direction offered a controlled environment that helped establish good pitch and sound. Gretton explains how pre-pandemic rehearsal procedures allowed for more of an organized session rather than the disarray of issues that presented themselves in the midst of online meet-ups and practices like conflicting schedules or a lack of control over individual spaces.

“The greatest issues ended up [being] sitting out for a semester or making other arrangements, so that was another major challenge where there’ve been issues with people’s ability to participate … because of people’s ability to work in a more controlled environment,” he said.

Gretton was also aware of the mental toll the pandemic would have on the St. John’s community and, in turn, situated himself in a position of consolation by consistently checking in and communicating with his choir members. He prioritized their health and has continuously insisted on remote practices, despite the tremendous amount of production work that would be needed in preparation for a new virtual showcase or event.

Gretton emphasized the importance of following CDC guidelines and maintaining safety standards for the benefit of himself, his choir and those who have long enjoyed the cheery attitude brought by the group.

“To me, the inconveniences of the technology, while daunting sometimes, is, I think, nothing,” he said. “When you think about the fact that someone’s life is being preserved, they’re being kept safe.”

When asked about future plans and hopes for the choir, Gretton, like others around the nation and those who are supporters of the arts, “look[s] forward to being able to have our performances take place on stages again with audiences, where we can actually feel the energy of an audience and also connect with one another in the artistic space.”

He plans for a brighter year and a more safe space for artists who have been struggling to stick to the twists and turns of the pandemic.

More information on showcases and events can be found on the official Voices of Victory instagram page here.