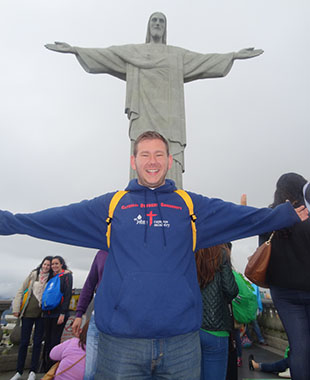 Senior Joseph Reis was one of the millions of young Catholics who arrived in Rio de Janeiro, Brazil to celebrate World Youth Day from July 23 – 28.

World Youth Day (WYD) is an event organized by the Catholic Church that aims to instill faith in Catholic children and young adults. This year’s event was the most populous World Youth Days to date as well as the first for Pope Francis,.

Reis, a psychology major, had always wanted to attend World Youth Day and got the chance when vice president of campus ministry and university events, Pamela Shea-Byrnes, informed him that he was chosen to be a student representative in November.

WYD has various faith filled activities including the Opening Mass, a Papal Welcoming, Stations of the Cross, A Night Prayer Vigil, and Closing Mass with the Pope. According to Reis, attendees also visited religious attractions and attended discussions of World Youth Day’s theme, “Go and Make Disciples of All Nations.”

“Brazil is the country with the most prevalent amount of Catholics, almost 65 percent of the country. It was also great to be there because the Pope was from South America and it was his first chance to return somewhere closer to home since being brought in.”

“World Youth Day has definitely impacted my life. It reminded me of a lot of the things that I hope to accomplish in my day-to-day life,” Reis said.

“I met a lot of great people from around the world that are proof of the universality of our Catholic faith.”

“I also learned a lot about being Catholic and Vincentian through catechesis and speeches from Pope Francis.”