Reaction on the Women’s March 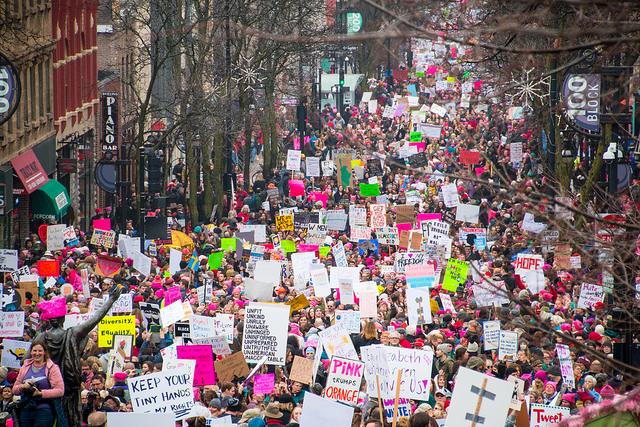 On Saturday, Jan. 21, men and women of different races, cultures, sexual orientations and religious beliefs came together in Washington D.C. not only to march for women’s rights, but for peace and equality for all. The Women’s March rally began at 10:00 a.m. and the actual marching didn’t start until roughly around 1:30 p.m.  This was an experience like no other. Thousands and thousands of people came out to have their voices heard and to make a statement.

On the morning of the march, I got to the metro station at 9:30 a.m. The first subway that pulled in heading towards the Smithsonian was packed with people wearing pink hats and holding various signs that had statements such as “Women’s Rights are Human Rights,” “Black Lives Matter,” “Love Trumps Hate” and much more. Once I finally arrived to the location of the event, I was immediately amazed with the amount of people and organizations that were there. The area that I was in had a big screen that was displaying the speakers and performers. While trying to get closer to the screen, I saw to my right a line of five people each holding two big pink letters that spelled “Narcissist.” People were clearly not afraid to voice their opinions about the new man in office.

The many speakers and performers that participated in the rally and march strongly addressed important topics and expressed their feelings about issues that America is facing.

The first speaker I saw was America Ferrera. Her speech overall was powerful and breathtaking, but her statement, “We will not go from being a nation of immigrants to a nation of ignorance,” is a line I will never forget. Other inspirational speakers included Angela Davis, Ashley Judd, Janet Mock, Scarlett Johansson, Michael Moore and more. I was able to see fantastic performances by Janelle Monae, Alicia Keys, Angelique Kidjo and others.

After the rally the marching began. People grabbed their signs and headed to the street. The march lasted for at least two hours, but the time flew by. During the march there were constant outbreaks of chants. Some of the chants were “We want a leader not a creepy tweeter,” “Tiny hands can’t build walls,” and “Black lives matter.”

Even after the march, people still gathered around to have conversations with each other and take it all in. This was an event that will never be forgotten. It has proved that there are more people in the world with love in their hearts. It shows that if we come together we can surely make a statement.