Kneeling in the Right Direction 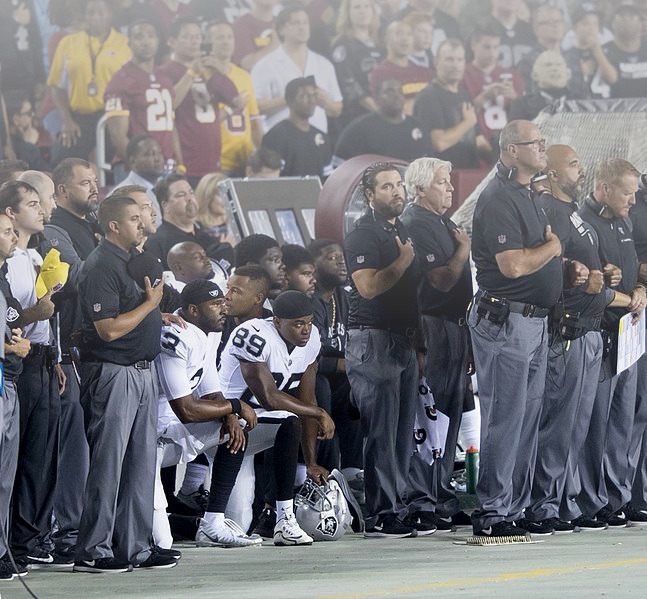 Recently, President Donald Trump has directed his attention to NFL players who kneel during the national anthem.

He said that if the NFL keeps allowing players to protest, the league’s business is “going to hell.”

I believe these players have absolutely every right to protest and their reasons are solid for doing so. I think the misconception over the protest is that these players are protesting the anthem.

However, the anthem is not at the center of the protests; the social injustice is.

Black people have been mistreated for as long as this country has existed and if kneeling during the anthem will draw attention towards the everyday occurrences in America, then why not?

These players have not turned to violent means to express themselves.

Instead, they used the platform made available to them to raise awareness. They are well within their rights, therefore the President has no authority to tell them that they cannot kneel.

In fact, I believe the subject in general is irrelevant to Trump and see it all as a diversion from the current issues, such as  natural disasters and threats from North Korea.

Instead of bashing on these players who are trying to reform some of the major issues in this country, why not make efforts to show them and others that they are being heard?

These players respect this country and protest because they see the potential for change. In addition, I feel that Kaepernick shouldn’t face the consequences of his efforts to protest.

His intention was never to come off as unpatriotic. Rather, it was to show his disdain for the reaction to Black people.

While he is recognized as the “face” of the protest in the NFL, there are several other players who have done it for years. Malcolm Jenkins of the Eagles has opted out of the anthem for years but no one has noticed.

Kaepernick had every right to kneel in a stadium where people could see that he was consciously taking a stance.

Overall, I think more people should support these players. Black people are not the only group to experience social injustice in this country. Women, the LGBTQ community and Muslim-Americans should start kneeling in support of these players.

There is strength in numbers and I would be absolutely honored to kneel alongside any of these athletes, in order to get the ball rolling on the path to reform.