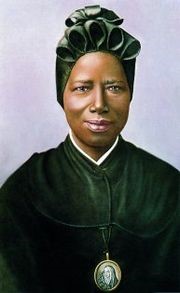 Pope John Paul II canonized Josephine Bakhita in 2000. That means that he declared her a saint, not that he “made her” one. Therefore, he expressed the recognition that the People of God know that she is a saint.

She dwells in the presence of God at this very moment. Bakhita was a Canossian Daughter of Charity, which reminds us that she is a part of the larger Vincentian Family.

Born around 1869 in Darfur, Sudan, she was subject to an abusive slavery for much of her life.

She had three brothers and three sisters and they were all members of the Daju people. She said she had a happy childhood.

Sometime before she was nine, she was kidnapped by Arab slave traders and sold numerous times over a 12 year period. They forcibly converted her to Islam, she forgot her own name and was consequently given the name Bakhita which is Arabic for “lucky.”

Beaten and scarred (“tattooed”) by various masters, she was finally sold to the Italian Vice Consul in Khartoum.

She was called to be the nanny to the daughter of an Italian Official who took her to Venice with the family on one of his returns home. Bakhita and the daughter were placed in the care of the Canossian Daughters of Charity.

When the Italian official decided to return to Sudan, Bakhita refused to leave. She was supported by the Italian government, which did not recognize slavery.

Thus, Bakhita remained with the Canossian Sisters, converted to Catholicism and received the sacraments. Then, at 27-years-old, she became a part of the community in 1896.

She lived and worked with the Sisters for the next 50 years of her life (until 1947). She joyfully did the common labor expected of the Sisters and spoke to the young Sisters who were preparing for missionary work in Africa.

It was said that her mind was always on God, but her heart in Africa.

The simplicity of the life of Bakhita, her acceptance of suffering and her joyfulness to be of service to others caused her to be considered a saint by the local townspeople of Italy.

They had reason to hold her up for admiration and intercession during the dark days of World War II.

In his Encyclical “Spe Salvi” (2007), Pope Benedict briefly tells the story of Bakhita whom he considers a model of hope.  He quotes one of the lines, which I always identify with this holy woman. She said, “I am definitively loved and whatever happens to me — I am awaited by this Love. And so my life is good.”

To know oneself as being “awaited” by God proclaims a beautiful truth about the nature of divine love. The simple words of our Sister summon us to be humble and profound introspection. The idea of being “awaited” stands out powerfully.

One could point to many members of the Vincentian Family of laypersons, sisters, brothers and priests who could be numbered among the blessed.

In this Black Catholic History Month, the example of St. Josephine Bakhita can hold a special place.