Flames of the Torch: #SaveStudentNewsrooms 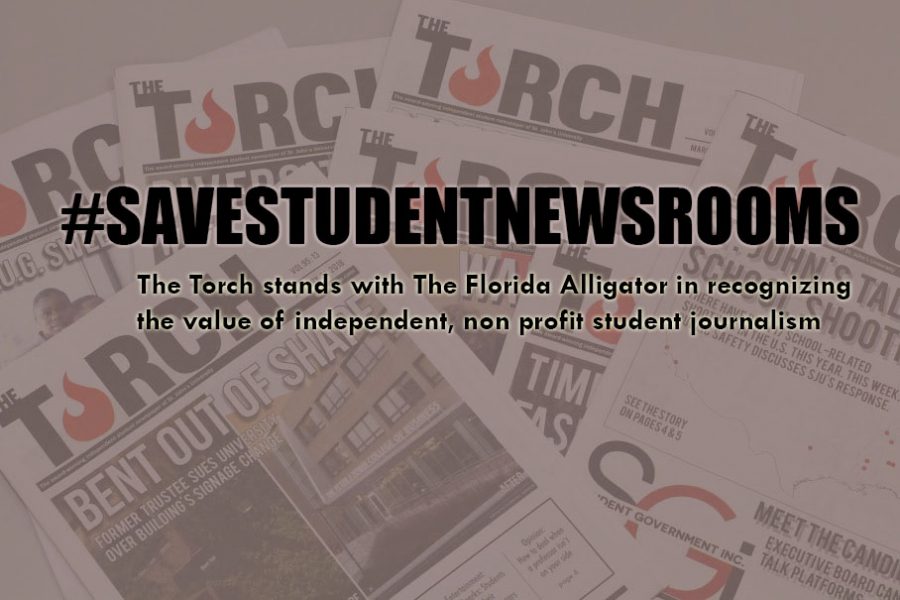 Today, student newspapers across the country will stand in unity to promote the importance of independent student-run media on college campuses. In light of an emerging national distrust in the media, now more than ever is the time to protect the voice given to college students through these publications.

The #SaveStudentNewsrooms campaign was started by the editorial board of the Independent Florida Alligator at the University of Florida. Hundreds of other student publications will also be participating in editorial pieces and on social media. It is our collective goal to show readers why student journalism truly matters.

On Support Student Journalism Day, it is especially important to recognize how student journalism can affect the University as a whole. Our cover story on a lawsuit over an alleged reneged oral agreement over the naming rights of Bent Hall, written by our Editor-in-Chief Emeritus Suzanne Ciechalski, was used as evidence in the university’s motion to dismiss the lawsuit. We have also written numerous pieces on the lack of diversity in the University’s faculty and administration, due to the concerns raised by students who have lead various protests on campus this academic year alone.

The Torch has experienced its fair share of opposition in the past. Despite backlash, we have stayed dedicated to producing quality unbiased journalism on topics that directly concern the student body. It would be a disservice to the University community for us to stop delivering news that matters.

Many college publications have also suffered from lack of funding. The Torch is no stranger to this dilemma, since we are financially independent from St. John’s University; our fundraising campaign to #KeepTheTorchLit last summer raised $4,190 to help with debt and printing costs.

Other student newspapers have not been as fortunate, however. According to CNN, The Daily Campus at Southern Methodist University in Texas was recently forced to re-affiliate with the university due to lack of funding. This is a precedent that could jeopardize the integrity that is so important for independent student publications.

Our nation can’t afford to lose independent student journalism. The need for news coverage unrestricted by the influence of university administration will never go away.

There will be those who do not understand the importance of the work we do, but we cannot let that stop us from fulfilling our journalistic duty to the University community. The student body deserves unbiased news coverage, and we at the Torch are dedicated to delivering this every week.

The Torch stands with its fellow independent student newspapers across the country. We hope you join us in the campaign to #SaveStudentNewsrooms.