Just Do It… or Just Don’t

Nike working with Kaepernick is what we’ve been waiting for 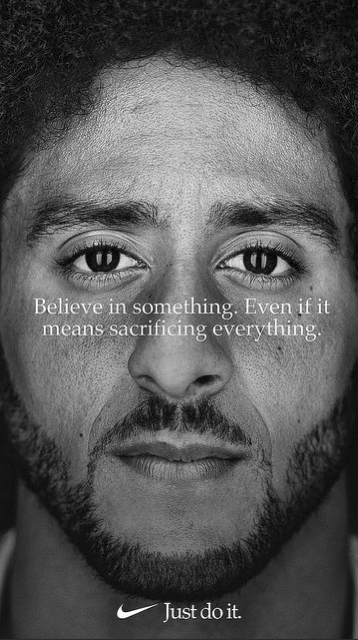 Nike’s class act slogan, “Just Do It,” gained a new meaning when the footwear giant decided to team up with the polarizing Colin Kaepernick.

In my eyes, it’s best move Nike could’ve made, although some others can’t say the same.

I completely support Nike and Kaepernick.

Although Nike working with Kaepernick is obviously more for financial gain, this collaboration does make a huge statement.

After Kaepernick kneeled during the national anthem as a way to protest racial injustice, he opted out of playing for the San Francisco 49ers last year.

Since then, he has not been signed by any NFL team.

This year, Nike has made Kaepernick the face of their new ad campaign, and of course it has received a lot of backlash.

Many people began boycotting Nike for securing Kaepernick for their new campaign. There have been some positives instances that have come out of this boycott.

One of them being that people can now identify those who they may not agree with and perhaps would rather not interact with.

This was truly a smart move for Nike, however I think that people will remember this as Nike supporting Kaepernick’s activism more than their desire for profit.

The ad presents a positive message of perservering through any setbacks.

As a means of boycotting, people are setting their Nike shoes aflame.

I couldn’t make this up even if I wanted to.

I find this idiotic because those people who are against Nike’s decision to hire Kaepernick are boycotting in a way that is a disadvantage to themselves.

As ridiculous as it is for people to do this, I’m not against them burning their shoes.

In fact, I think that they should continue to buy Nike shoes and do whatever they want with them.

I can sleep easily at night knowing that Kaepernick is going to get a great cut of the money those people are spending, buying shoes from Nike just so they can “boycott” and express their outrage.