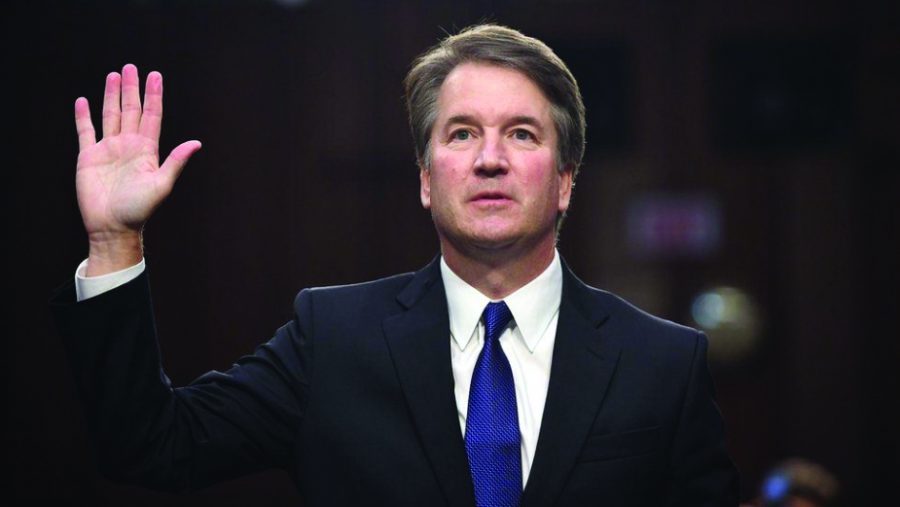 Brett Kavanaugh during his hearings

When Supreme Court Justice Anthony Kennedy announced his retirement earlier this year, President Trump immediately nominated Brett Kavanaugh to fill the seat. “There is no one in America more qualified for this position and no one more deserving,” Trump said about his nomination.

While there are no specific qualifications to become a Supreme Court judge, there has to be a line drawn when it comes to filling one of the most important positions in the U.S. government, and Kavanaugh has stepped over that line a couple of times.

When he was asked a series of questions by the Senate, he refused to answer some of them, even though they were important and required answers.

He was asked if the Constitution would allow Trump the presidential power to stop the Russian collusion and obstruction investigations. He refused to answer the question.

Any other Supreme Court nominee would in my opinion, answer the question with a simple no. However, Kavanaugh acted like the question was the most difficult question of his life.

Neil Gorsuch, a Supreme Court justice that was chosen by Trump last year, dodged a few questions as well. He did, however, answer some very important questions. For example, if Trump asked him to overturn the landmark Supreme Court case Roe v. Wade. “No…I would have walked out the door.” Gorsuch said. “That’s not what judges do.” Yet Kavanaugh can’t answer a question about whether he would disqualify himself from cases that involve Trump.

This is really frustrating because I believe that a Supreme Court nominee should be honest when it comes to serious questions before filling the seat. Trump probably picked Kavanaugh to do what he wants him to do. Although Gorsuch was also picked by Trump, he at least stands up for himself and calls out Trump when he disagrees with him on matters. Another reason why Kavanaugh shouldn’t be a Supreme Court justice is because the Trump administration and the GOP refuse to release thousands of Kavanaugh related documents to the public.

That alone is a warning because the public has the right to see those documents.When a political party decides not to release them before the hearings, you better believe that they know something that they don’t want the public to see.

New Jersey Senator Cory Booker knew that this action wasn’t right. So, during the hearing, he released some of the confidential documents, despite being threatened by the GOP for possibly violating Senate rules. Booker didn’t care because he knew that this process was a sham.

I believe that the GOP wants to nominate people that only benefit their interests. Kavanaugh is definitely not for the American people.