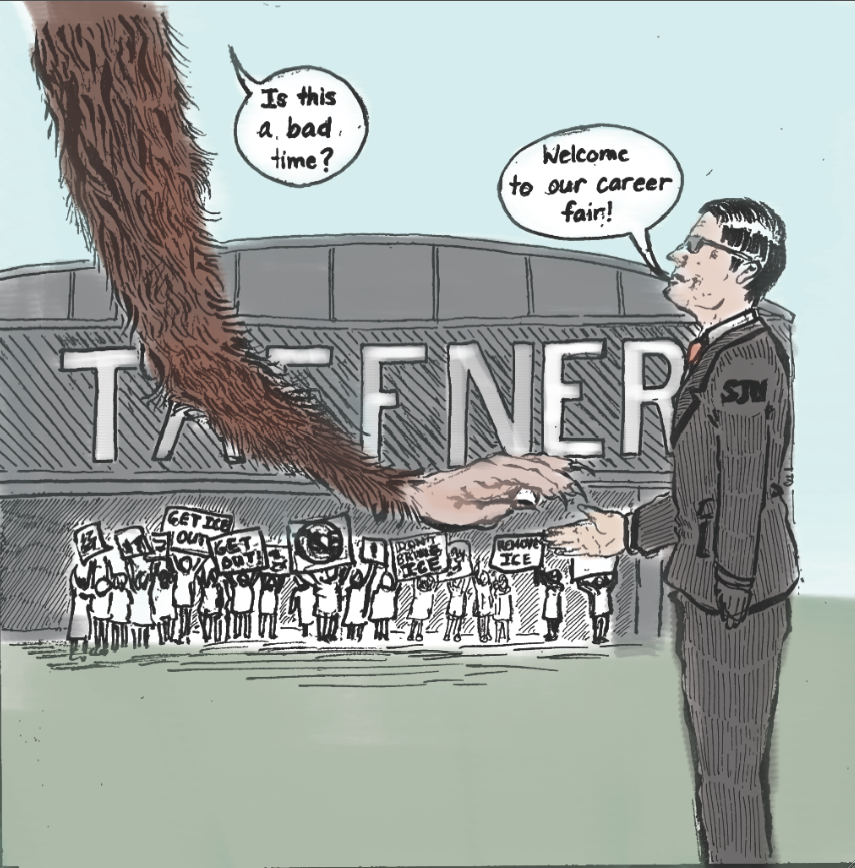 St. John’s University campus depicted on the day ICE and U.S. Customs and Border Protection were scheduled to appear.

Following the 2016 Presidential election of Donald Trump, the St. John’s Division of Student Affairs and the Office of Human Resources released a statement that displayed the school’s support for the federal Deferred Action for Childhood Arrivals policy (DACA) and any undocumented students that are part of the University community.

“As a Catholic university, we respect the rights and dignity of every person, including those living without authorization in the United States and students covered by the federal Deferred Action for Childhood Arrivals immigration policy,” the statement said.

University president Conrado “Bobby” Gempesaw released his own statement in September of last year in response to the White House rescinding DACA.

“As a proud immigrant to this country, I am disheartened by some of the political rhetoric and discourse that persists around the ongoing debate for meaningful and comprehensive immigration reform,” he said. President Gempesaw said that he was “disheartened” by the actions of the Trump administration.

I think it is fair to say that many individuals that comprise St. John’s student body were “disheartened” last week by the school’s decision to invite (ICE), Immigration Customs Enforcement and the U.S. Customs and Border Protection to the 2018 Career Fair.

A school that loves to flaunt, advertise and profit off of its diversity decided to invite agencies, specifically, ICE, that have become notorious for its heartless, dehumanizing and aggressive tactics regarding undocumented citizens of the United States.

Is St. John’s really a school that appreciates and protects its minority students or is it just benefitting from them and then willing to toss them aside? With this recent action, it certainly seems to me to be the latter.

Following the email advertising both ICE’s and the U.S. Customs and Border Protection’s planned appearance to the career fair, a protest was almost immediately formed by student organizations that felt threatened, and rightfully so, by the agencies.

Students were encouraged to wear black clothing as a statement against the agencies’ presence on campus.

St. John’s argues that the agencies were invited in order to speak with students whose majors are related to their field. However, given the political climate and the reputation ICE has of ruining the lives of innocent people, it was at best tone-deaf and at worst heartless of the university to invite them.

While St. John’s said all the right things following Trump’s election, their actions last week damaged the trust that many students — especially minority students — have in the school. You’re either for us or against us.