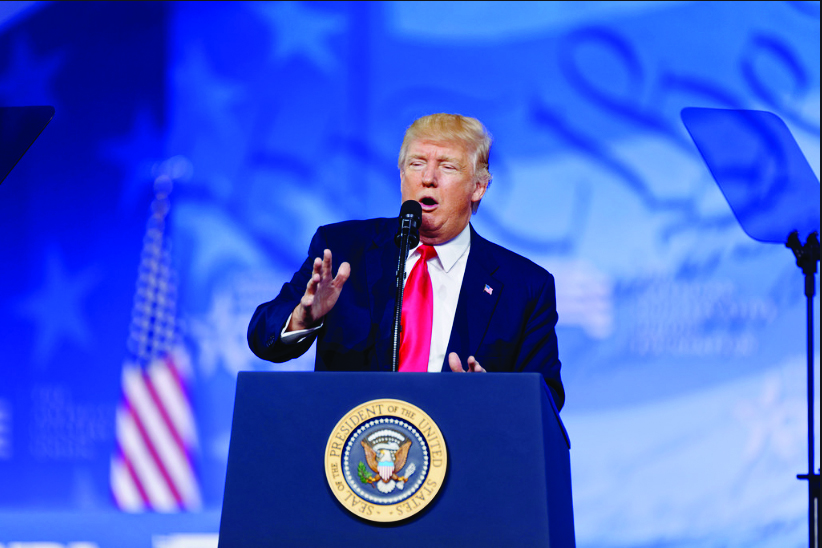 President Trump has recently stirred the pot with his new tariffs.

The recent economic tirades by Donald Trump on China are a part of a long list of temper tantrums the President has had regarding the growing Eastern superpower. Starting September 24, the United States will impose a 10 percent tariff on $200 billion Chinese goods before raising the tariff to 25 percent  beginning on Jan. 1. In response, China has also imposed another set of tariffs on $60 billion of U.S. goods. So what does this mean for us? For one, this is certainly a bad move made by an already unstable President.

Like him or hate him, the evidence is showing that these outbursts of rage, followed by elementary bullying tactics to gain superiority are not working to his advantage. The recent critiques he received from inside his own cabinet that were exposed in the book, “Fear,” by journalist Bob Woodward.Though, the President has continued to make rally appearances in order to shore up his allies during a heated election year, his grasp of power in the international community is shrinking. This means good news for China, a nation that has been posturing itself to become the dominant Eastern power and has been muscling its’ way further into global politics. Specifically as Trump’s nationalist rhetoric has killed deals like the Trans-Pacific Partnership, (TPP), which would have economically hindered China, as it was not included in this deal.

China being able to make more one-sided deals on weaker Asian markets makes the trade war with the U.S. one of attrition. The Trump administration has also seemed to have miscalculated China’s reaction.

As in prior weeks, China tried to arrange meeting with Secretary of Treasury Steven Mnuchin to end the escalating trade war. However, earlier this week China suspended all efforts to seek a resolution.

Normally, the United States could economically shift its lost markets to Europe or other Asian markets. However, that was only until Trump engaged in trade wars with the E.U., as well as other nations. The result is that American farmers and small businesses now face the pressures caused by the cheaper production of Chinese goods.

While Trump exclaims at rallies that he is going to “Make America Great” by moving industries back to the United States and painting China as the evil “McCarthy-ian” threat, the reality is stark.

It becomes a lot more expensive and harmful to the economy to disengage in the globalized market. More so, the longer the trade war goes on, the more the entire image of the United States as a global power looks like the dying strikes of an old wolf.

It’s clear that Trump knows this but is doubling down due to fear of admitting defeat.  He’s unlike China in that they don’t have to weather this storm. Due to President Xi Jinping’s constitutional changes to remain in power as long as he likes. In an election year, many GOP supports have started to splinter, as more tax dollars are being diverted to aid those affected by the trade war. Only time can confirm that this might be the biggest economic disaster in the President’s legacy.