Trump may provoke rage but he’s inspired a movement 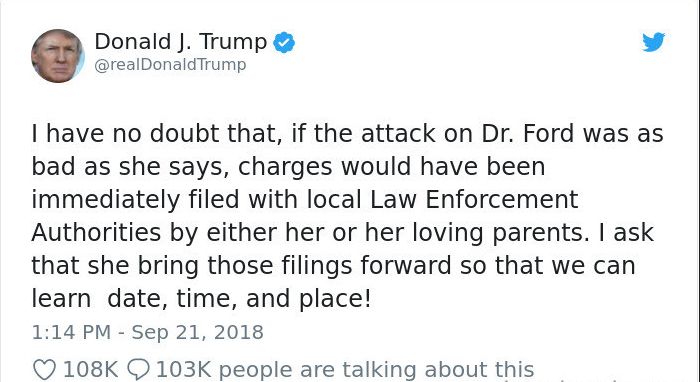 Of all the things that President Donald Trump has said during the first two years of his presidency, the most baffling statement that he has said was in regards to Dr. Christine Ford’s sexual abuse claims against Supreme Court Nominee Brett Kavanaugh.

Five days prior to the hearing, Trump tweeted this:

“I have no doubt that, if the attack on Dr. Ford was as bad as she says, charges would have been immediately filed with local Law Enforcement Authorities by either her or her loving parents. I ask that she bring those filings forward so that we can learn, date, time, and place!”

I am at a loss for words.

The amount of arrogance that was displayed in his tweet is astonishing.

There is a multitude of different reasons why many people don’t report their sexual assault.

It just so happens that many sexual assault survivors posted their reasons why on Twitter following Trump’s tweet.

Thousands of Twitter users, including celebrities like Alyssa Milano and Lili Reinhart, have shared their sexual assault stories and it was both heartbreaking and inspiring.

Their accounts ranged from being traumatized, fearing rejection, to seeing their lives be destroyed and fear of being expelled from school.

One of the most popular tweets came from political activist and actress, Ashley Judd.

“The first time it happened, I was 7. I told the first adults I came upon. They said ‘Oh, he’s a nice old man, that’s not what he meant.’ So when I was raped at 15, I only told my diary. When an adult read it, she accused me of having sex with an adult man,” the tweet said.

At the end of the day, what Trump really did was empower more people to speak out against sexual assault.

Due to that, more life was added to the #MeToo movement that was beginning to lose steam.

Even though Trump’s tweet was  completely appalling and a disrespectful statement that I completely disagree with, it did help strengthen the need to speak out.

And as a result, #WhyIDidntReport became another important factor to the #MeToo era.