President Trump’s mimicking of Dr. Ford is nothing new or surprising 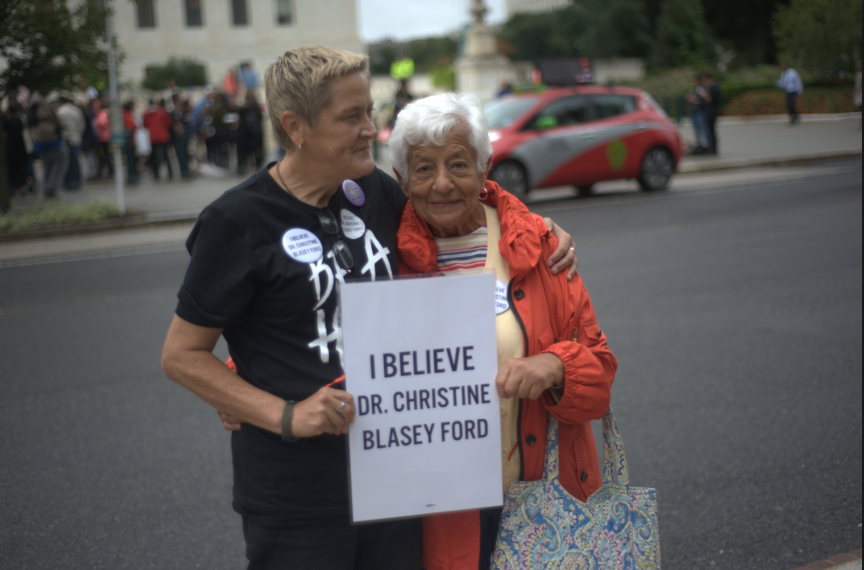 A protest on the streets of Washington D.C. against Brett Kavanaugh

In yet another instance of President Trump condoning sexual violence against women, he was recently seen mocking Dr. Christine Blasey Ford’s testimony before the Senate Judiciary Committee at a rally in Mississippi last week.

The objective of the president’s “Make America Great Again” rally in Southaven, Miss. was to discuss economic issues and their effect on Mississippi, and to endorse Republican candidates for the upcoming midterm elections.

But President Trump, as usual, could not refrain from embarking on yet another one of his rambling diatribes. This time, the target was Dr. Ford, the woman who accused Supreme Court Justice Brett Kavanaugh of sexual assault.

It was an appalling spectacle to watch the leader of our country verbally attack an alleged sexual assault victim while thousands applauded and hooted with laughter.

It’s a narrative that has become all too familiar: Donald Trump utters something inane at one of his political rallies and his supporters, those blindly loyal to the demagogue, guffaw.

But this was no laughing matter. President Trump was not merely “stating facts,” as press secretary Sarah Sanders erroneously asserted. He was underplaying and denigrating Dr. Ford’s experience as an alleged sexual assault survivor.

That the president made a mockery of her testimony was an affront to every individual who has ever experienced the anguish of being a sexual assault survivor.

But Trump’s remarks shouldn’t surprise anyone, given his own history of denying and dismissing the multitude of sexual misconducts of which he has been accused. As CNN legal analyst Jeffrey Toobin suggested, “It’s in his nature to not believe women who accuse men of sexual harassment or assault.”

Lest we forget when the president defended Republicans’ nominee for last year’s Alabama Senate race, Roy Moore, after he was accused of sexually pursuing teenage girls. And what was Trump’s rationale for standing by his nomination? Moore said he didn’t do it, which was apparently enough for the president to exculpate someone of a sexual assault accusation.

Trump’s crude mockery of Dr. Ford’s wrenching testimony was contemptible. Sexual assault accusations are nothing to scoff at. The President, Congress and American people should take seriously sexual assault allegations against a Supreme Court nominee irrespective of when the alleged assault occurred.

President Trump, suppose your daughter Ivanka, recently informed you that she was sexually assaulted during her adolescence. Would you deride and dismiss her, too?