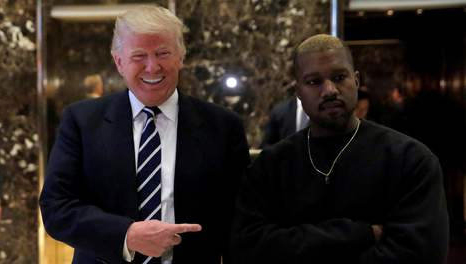 President Trump and Kanye West meeting a month after the president’s electoral win.

Warning: the following content will most likely be “Saturday Night Live” approved and Kanye West disapproved.

It seems as though the once influential rapper Kanye West has been “team Donald Trump” ever since Trump wanted to run for president. I’m not criticizing West for being a republican and being so besotted with Trump because it is everyone’s human right (assuming that West is human) to think how they want  and to believe in whatever they want. I am a little confused, however, with West’s current political views, since in 2005 he claimed that former president George W. Bush didn’t care about black people.

On Oct. 11, West did something that I really disagreed with: he had lunch with Trump at the White House.

Apparently, his unwanted speech during “Saturday Night Live” a few weeks ago wasn’t enough for him to prove to the public that he is Trump’s butt kissing right-hand man, so having a live broadcast of a lunch meeting with the president was the way to do so.

From my point of view, the conversation he had with Trump consisted of bad mouthing democrats and liberal while whining over the negative comments people have made about Trump and West.

Although almost everything West said during the meeting irritated me, there were two specific comments he stated that truly left me exasperated.

The first comment he made that really got to me was when he brought up what he said about Bush in 2005.

“I was very emotional and I was programmed to think from a victimized mentality. Of a welfare mentality,” West said.

First, I would like to point out that he uses the word ‘programmed,’ which leads me to believe he might not actually be human.

Second, it’s hard for me to take this seriously. I can’t help but think this is an ingenious way for West to get attention. The next incredibly annoying comment he made was referring to the ‘Make America Great Again’ hat.

Cue my eye roll. I do not support or condone West’s love for Trump. He is so head over heels for this obviously sexist, racially discriminating, unsympathetic man, that it’s as though he was kidnapped by some right-wingers and brain washed for five years straight.

To me, the entire meeting was unsettling and the worst moment was near the end when West got up to hug Trump.

This is a bromance that I wish did not exist.