The Chaos of Trump 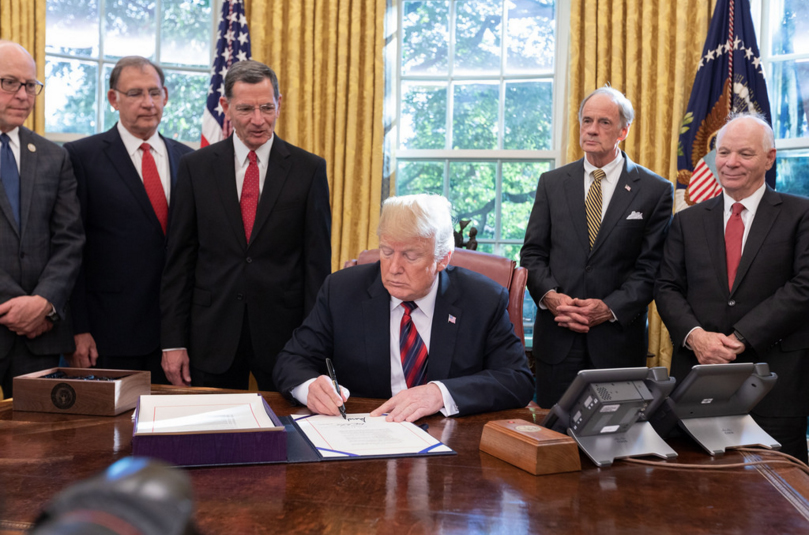 President Trump in the Oval Office signing the S. 3021-America’s Water Infrastructure Act of 2018, this past October.

This only scratches the surface with all that has happened during President Donald Trump’s administration. But have we learned anything?

At first, nobody took Trump’s candidacy seriously. The only reason he was a household name was because of his status within reality television.

This very idea was the subject of one of Obama’s punchlines at the 2011 White House Correspondents Dinner. I can only imagine how silly Obama must have felt after Trump’s inauguration.

Who is to say that Trump does not deserve the last laugh? Hillary Clinton could not have been a worse candidate if she tried. Being out of touch with middle America, and  generalizing Trump supporters as “deplorables” was enough to warrant a Trump win. This rhetoric has not changed for the Democrats. The resistance continues to demonize Trump and his supporters, further energizing them in the most ironic manner possible. The debacle involving Brett Kavanaugh’s Supreme Court nomination proves this.

That’s not to say Kavanaugh is free of guilt; his affection for beer and what was written in his high school yearbook are troubling signs.

But neither side truly wanted to find out what happened. Instead, everyone wanted to further their own narrative.

What about Trump’s accomplishments? He ran his campaign on building a wall, which still has not been built.

The economy is doing well, but many factors could attribute to that besides Trump’s deregulations. Obamacare is no more, and instead we’ve had four different reforms.

With all of its flaws, the compromises made with Obamacare to ensure a healthcare for all have been undone. This has resulted in healthcare devolving into a mess that no American struggling to pay for healthcare wanted.

Although Trump’s election, and all that has unfolded since, makes it seem as if we are more polarized than ever, there is still hope. The initiative authored by Stephen Hawkins and colleagues, “More in Common,” conducted an extensive study on this, finding that 86 percent of people are in the “exhausted majority.”

These are people who are “ideologically flexible” and “feel forgotten in political debate.” Of this group, 65 percent of them were for the idea of compromise. Even 51 percent of both extremes presented in the study believe this too.

It may seem as if Trump’s election and his presidency have polarized us all. However, we are still capable of coming together as the great nation we are. The constant barrage of scandals, mainstream media’s unwillingness to cover other issues with the similar passion and the Democrats’ failure to learn from their mistakes do not help.

Trump being himself doesn’t help either; when tweeting haphazardly and being spineless on his own issues (his hesitation on commenting on Saudi Arabia’s involvement in  Washington Post journalist Jamal Khashoggi’s death comes to mind).

There is no way to tell how much Trump’s presidency is truly going to impact our future. But the chaos that has ensued is not promising.