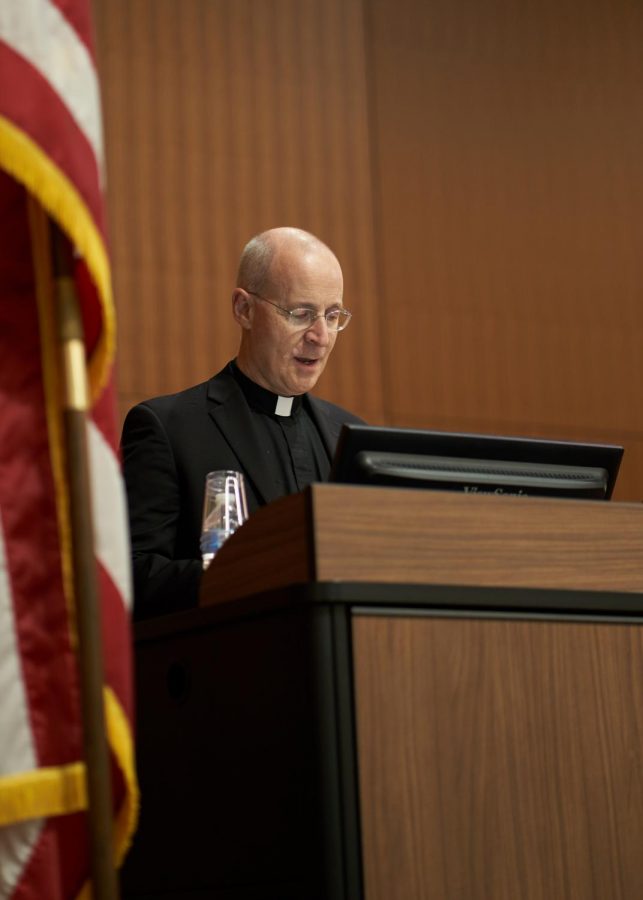 On Nov 8, Jesuit priest Reverend James Martin, who was appointed as a consultor to the Vatican’s Secretariat for Communications by Pope Francis, visited campus to give a talk.

During the lecture, titled “Building a Bridge: Reaching Out to LGBT Catholics,” Martin discussed his similarly-titled book, “Building a Bridge: How the Catholic Church and the LGBT Community Can Enter into a Relationship of Respect, Compassion and Sensitivity.”

The talk, and the book, are an attempt to alleviate the long-held tension surrounding LGBTQ+ people within Catholicism.

As someone who was raised Catholic but is no longer involved in the religion, I was intrigued and decided to attend the lecture.

Based on the things I heard throughout my time in the faith, I could not imagine what could possibly be said to close a divide so massive. And by the end of the speech, I believed that Martin is part of the problem.

The talk centered around the idea that LGBTQ+ people are human beings who actually have talents, feelings and full lives outside of their sexualities (who knew?).

Martin encouraged Catholics to be kind and respectful to LGBTQ+ people, as everyone deserves to feel welcome.

My question is: Why did Martin decide to give an entire lecture to say that Catholics should practice basic human decency and treat people like people?

The fact that Martin saw the need to spend 40 minutes reminding Catholics to be nice to people who are different from them is troubling.

At this point, it became clear to me that Martin simply wants to put a band-aid on an issue that is rooted in the faith’s anti-LGBTQ+ rights ideology.

At the end of Martin’s lecture, which almost entirely consisted of talking points reminiscent of middle school anti-bullying campaigns, he opened the floor for questions.

One audience member asked if Martin believed the Church would ever recognize same-sex marriage (it won’t).

This prompted him to assert that he does not go against church teachings on gay marriage or “activity.”

The fact is that society is becoming increasingly accepting of LGBTQ+ people.

An institution that does not even support gay marriage, and in which many members struggle to treat the LGBTQ+ community as equals, will naturally appear outdated and bigoted to many.

I am not saying that Catholics are obligated to believe things that conflict with their religion. But I am saying that they cannot pretend that their faith is truly open and accepting of LGBTQ+ people when they can’t even marry in the eyes of the church.

Most LGBTQ+ people do not want to be part of a religion that says they can have certain feelings about themselves or toward others but can’t actually be gay or trans.

If the goal was to bring me back to mass, it was not accomplished.

I left the auditorium feeling the same way about the church’s treatment of this community as I always have: Hurt, confused and angry.