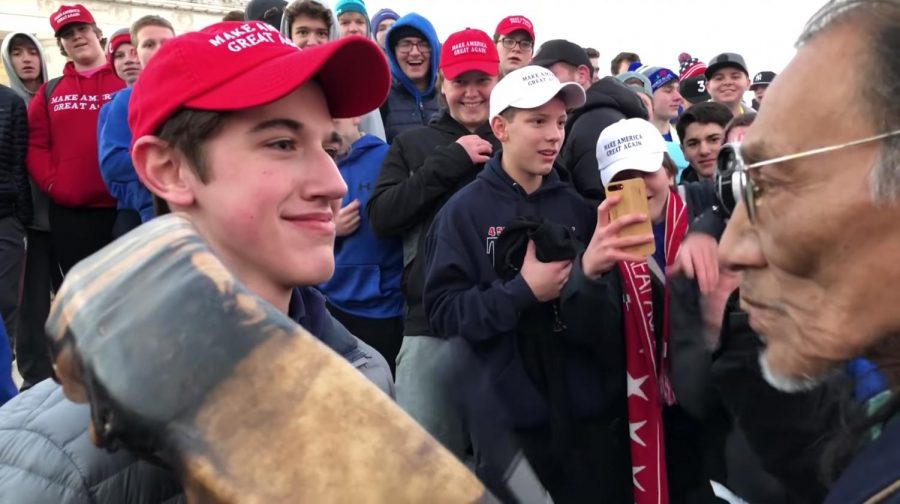 A screenshot of the interaction between Nick Sandmann of Covington Catholic High School and Nathan Phillips elder of the Omaha Tribe.

As readers and writers, we’re responsible for the stories we read and how exactly we choose to interpret them. We can either take one story as it is, without further question, or we can aim to know more.

On Jan. 18, when students from Covington Catholic High School in Kentucky traveled to the Lincoln Memorial in Washington, D.C. for the March for Life rally, an Indigenous People’s March was also being held.

Conflict arose after a viral video spread about a Native American man, Nathan Phillips and a young white student, Nick Sandmann, coming face to face with one another as Phillips beat his ceremonial hand drum in prayer. Sandmann appeared to be smirking at Phillips while being surrounded by a crowd of his high school peers.

Many people that reacted to the video interpreted the student’s apparent smirking as a taunting look towards Phillips that generated feelings of disgust.

How come?  Well, people also took notice of his hat; a clear representation of where the student’s support lies politically.

The Make America Great Again (MAGA) hat is a symbol that reminds people of our current president’s views. It’s difficult to forget his discriminative history, especially toward Native Americans in this case.

For example, in October of 2018, Trump called Massachusetts Senator Elizabeth Warren “Pocahontas.” Another instance was in 2000, when he paid  $1 million worth of ads portraying the Mohawk Indian tribe as cocaine traffickers, according to Washington Monthly.

This encounter is now an add-on to Trump’s bias considering he undoubtedly defended accusations of Sandmann harassing Phillips and claimed the student was actually being treated unfairly as was  reported by the Washington Post.

It’s with the red hat that we assume who Sandmann is and what he stands for.

The smirk has become a topic of conversation that makes us think about our initial reactions before diving deeper into really knowing the whole story.

While Sandmann states his expression was actually a smile rather than a smirk in his Today interview , Phillips interpreted it as a look of injustice toward him.

There are constant opposing views that continue to divide us as people, especially with a story like this that has  developed based on absolute judgement.

As important as it is to understand our emotions in regards to any injustice, it’s easy to forget about our investigative integrity, especially in this case of a story that was also a conversation of “fake news.” We should be able to develop an understanding about what we know by gaining more knowledge about our society and how we decide to be within it.