A Misleading State of the Union Address 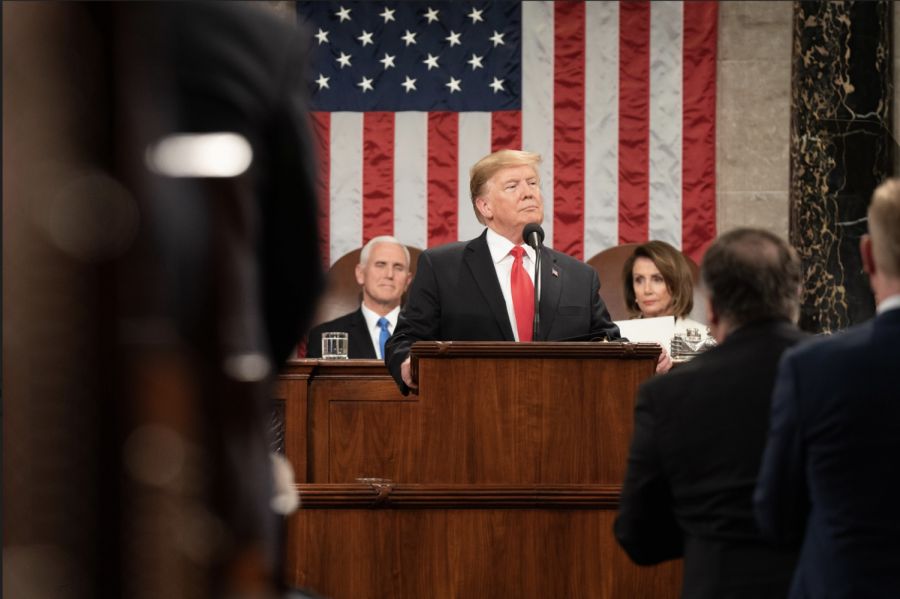 President Donald Trump delivering the State of the Union on Feb. 5.

Weeks after the longest government shutdown in U.S. history, President Trump delivered a State of the Union Address that sought to bring unity to a very divided Congress and provide the American people with a sense of hope that the government will no longer face a similar dilemma.

The problem was that it brought about anything but unity. In fact, it probably made people more infuriated with Trump — and rightfully so.

One of the problems with Trump’s speech was that there were a lot of misleading facts and statements.

During the State of the Union Address, Trump stated that El Paso,Texas used to be one of the most dangerous cities in the U.S. and then said, “Now, with a powerful barrier in place, El Paso is one of our safest cities.”

The rate of violent crime in El Paso peaked in 1993, with 6,500 violent crimes being recorded, according to The El Paso Times website. That number has decreased between 1993 and 2006, where the number of crimes fell by more than 34 percent, with 2,700 crimes being reported. It was reported that the crime rate increased between 2006 and 2011, when President George W. Bush authorized the border fence to be built.

Another claim that Trump made was that he wants to tackle health-care.“The next major priority for me, and for all of us, should be to lower the cost of health-care and prescription drugs and to protect patients with preexisting conditions,” Trump said.

I found this to be very hypocritical because Trump and his administration have been trying to get rid of the Affordable Care Act for years. And when the Care Act was faced with lawsuit to end protection of preexisting conditions, he did nothing.

When the State of the Union Address was over, former Georgia gubernatorial candidate Stacey Abrams delivered the Democratic party’s response to Trump’s speech.

In her speech, Abrams called out Trump for being responsible for the government shutdown that left hundreds of thousands of federal workers without pay for 35 days.

Not only that, but she also called him out on issues that are debatably more important than the issues that Trump brought up such as gun control, immigration and climate change among others.

“Our leaders must be willing to tackle gun safety measures and face the crippling effect of educational loans, to support educators and invest what is necessary to unleash the power of America’s greatest minds,” Abrams said.

Abrams makes a good point. The State of the Union Address felt like it focused more on Trump’s needs than the needs of the United States. Ever since Trump took office, there are multiple issues that have yet to be resolved, like the ones mentioned in the previous paragraph.

If Trump really wants to bring about unity, then he should stop focusing on what he wants and focus on what will benefit the country.