Children Strike Back Against Climate Change 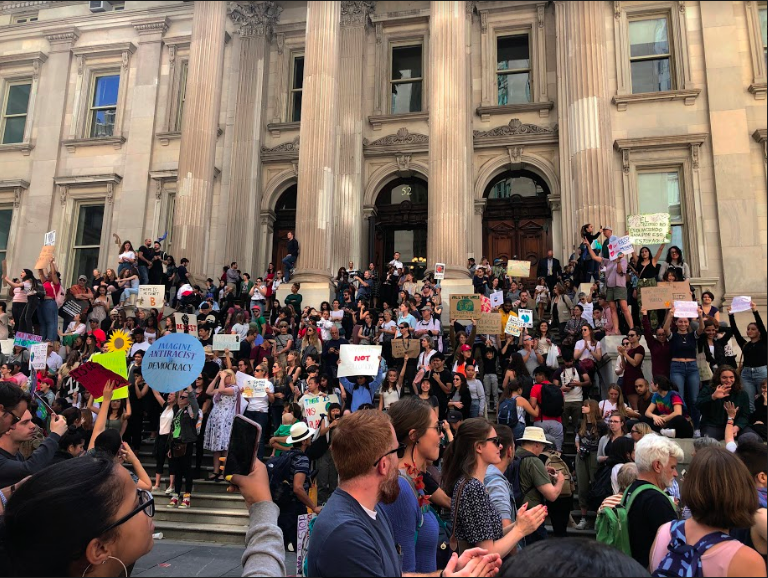 On Friday Sept. 20, hundreds of thousands of people across America marched and rallied in support of #ClimateStrike. I attended the rally that occurred in Manhattan with my friend. The demonstration began at Foley Square and ended at Battery Park, where Willow Smith performed and Greta Thunberg gave a speech. My friend and I paraded, along with an estimated 250,000 people, demanding action be taken to halt the quickening death of our precious Earth.

I saw an Instagram post by Willow Smith, announcing that she would be performing at #ClimateStrike. I wanted to go, but I did not know anyone who was available that day until my friend mentioned that she was going. I immediately invited myself (unapologetically so). The turnout surprised me. I suspected that thousands of people would attend, but I would have never guessed that hundreds of thousands of people would fill the streets of Manhattan to protest against climate change, especially children in elementary and middle school. I expected mostly high school and college students to attend; I did not expect to see children as young as eight-years-old.

Granted, most were probably forced to by their parents or teachers. However, some seemed to genuinely care, even though they might not fully understand the purpose of the march. One of the first encounters I had at the rally was with a group of schoolgirls, around eight or nine-years-old chanting: “We don’t have a planet B! The ocean’s rising, why aren’t we?!” Another encounter I had was with a girl, around eight years old, during the march to Battery Park, who had wrapped a poster she made into a cylinder to use as a megaphone, to loudly ask: “Do you want to change the world?!” In turn, people surrounding her, including myself and my friend, responded: “Yes, we do!” A third encounter I had was with a 12 or 13-year-old girl standing on a brick wall at City Hall, holding up a sign that read: “THE OCEANS ARE RISING AND SO ARE WE.”

These are only a few of the many encounters I had at #ClimateStrike. I was taken aback by each of them. I did not think children in elementary or middle school cared about the current state of our world.  Seeing children in elementary and middle school take part in #ClimateStrike was moving. I was almost brought to tears when I realized that these children are being raised correctly by their parents to be leaders and to be compassionate individuals. I am in awe of how young kids want to get involved in changing our world.

It is important that the younger generation voice their opinion; they bring awareness to issues that need to be changed and that affect our future. They remind me that there is still hope for humanity, and that there are still good people in the world. I would say they are the future leaders and educators of our world, but they are already leading and educating.