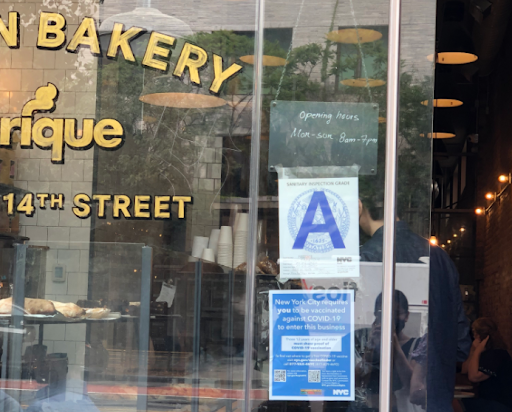 New York City is the first city in the United States to require proof of at least one dose of a coronavirus vaccine for workers and customers at indoor dining, gyms and live performances such as concerts. This mandate would require that patrons show their vaccine card — paper or digital as an Excelsior Pass — before they gain entry into an event or activity. This “Key to NYC” program will require customers and staff over 12 years old to be vaccinated if they are partaking in an activity over 10 minutes long. Any businesses that violate the mandate will be subject to a $1,000 fine for the first offense. For institutions that continue to offend, the charges will only become higher.

This has been required in New York City since Aug. 17, but there was a “grace period” between then and Sept. 13 for establishments to acclimate themselves to the new requirements, which also helped remind patrons of the mandate. Many of my friends who had been fully vaccinated were reminded to start bringing the card with them. Those who are unvaccinated now have a reason to get the shot: to return back to normalcy like everyone else.

This past week, for the first time, I saw many indoor dining areas putting up signs that only those who had been vaccinated were permitted to sit down and eat. I was shocked, yet thankful to see that these kinds of policies are in motion and may motivate another person to get the FDA approved vaccine.

I think that this mandate will mean the difference between New York City becoming the epicenter of the pandemic or not, for a second time. According to NYC Health, New York City in particular has a fully vaccinated rate among adults (two doses for Pfizer and Moderna, one dose for Johnson & Johnson) at 70.1%. In fact, the effects of our comparatively high vaccination rate can already be seen in our current number of cases versus those in less-vaccinated states like Florida. According to The New York Times as of Sept. 1, 2021, there were 19,048 new cases reported in the state of Florida. In New York on Sept. 1, how many new cases were there? 1,207. The United States Census Bureau (USCB) confirms that Florida’s state population is 21 million, thus rendering the proportion of new cases to the state population around 0.09%. USCB also affirms that New York’s state population is 20 million, meaning the proportion of cases to overall population is 0.06%.

It’s evident that this drastic difference in new cases is due in part to vaccination rates. Becker’s Hospital Review ranks states daily by percentage of fully vaccinated people. As of Sept. 2, the number one state is Vermont at 67.93%. New York is ranked eighth at 60.27%. Florida, ranked 22nd, is at 53.19%. The COVID-19 related fatalities in Florida are also disproportionately greater than those of New York. The New York Times reported that Florida’s seven day average (Aug. 25 to Sept.1) of COVID-19 deaths was 263, while New York’s was 11. The high fatality rate is most likely attributed to the lack of vaccinations. The Commonwealth Fund found that, if states like Texas and Florida had higher vaccination rates, they could have prevented 4,700 lives being lost in July.

With the surge in new COVID-19 cases tied to the delta variant and children’s schools reopening, this mandate is needed more than ever. But this begs the question: Why only require one dose of a coronavirus vaccine if the data demonstrates a higher efficacy rate in those who get both of their doses? The Lancet published data from a study done by Public Health Scotland and EAVE II which shows that against the delta variant, one dose only has a 30% efficacy rate. With two doses, it is 79%. Israel’s Public Health Ministry also reported drastic drops in the efficacy rate among delta back in July. It is no wonder that Pfizer is now encouraging a third booster shot for the immunocompromised.

On Sept. 2, due to delta, Seattle enforced masks in outdoor gatherings larger than 500, again — could this happen to New York if not enough get vaccinated? It is in the realm of possibility.

The vaccine policy is being picked up by other cities, too. San Francisco followed New York’s lead by implementing a vaccine requirement for all indoor activities; this mandate was enforced starting Aug. 20. However, San Francisco will be requiring full vaccination, meaning two doses of Pfizer, two doses of Moderna or one dose of Johnson and Johnson. They will also allow employers two months to verify their employee’s vaccination status. Los Angeles is also considering it.

To keep the public’s health safe, we must implement stricter requirements on vaccinations. We cannot just do half of the work and expect the rest to follow. People must understand that it is their own personal decision and liberty to get the vaccine or not, but by refusing to do so, they are threatening the health of their community. Private and federal institutions reserve the right to refuse serving unvaccinated clients. This matter isn’t just about buying cake or seeing your favorite singer — it is about protecting your neighbors from ending up in the ICU on a ventilator. It should not be such a political or polarizing issue to show empathy and care for those around you.