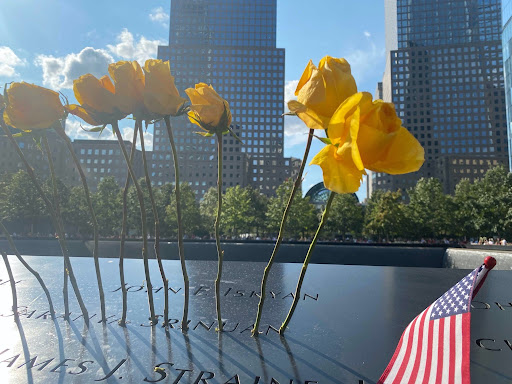 Almost everyone who was alive during the terrorist attacks on Sept. 11, 2001 knows exactly where they were when it happened. My grandmother was serving grits to her husband when she received a frantic phone call from her daughter, my mother, to switch the television from the typical Andy Griffith Show to the news.

My mother was nine months pregnant with me at the time. She told me that she thought the pain she felt watching CNN was going to induce her into labor. Her heart, on par with the hearts of America and the world, suddenly felt as if talons were grabbing at it. Time froze, and she knew that life would never move forward as it had. She describes her life as experiencing two different worlds – pre-9/11 and post-9/11.

Now, as I approach my 20th birthday, I get the privilege of being in New York City to honor those lost here two decades ago. A child of the post-9/11 world, I will never know a time when airport security did not include full-body pat downs and complete luggage searches. The term ‘terrorist’ became part of my vocabulary as early as 7 years old. Most prominent of all, there is not a time in my life that I cannot recall the photos of young men and women jumping out of a building hundreds of feet tall, among other ghastly sights.

As I walked off the J Train to the World Trade Center on Sept. 11 of this year, I wondered if those photos had the same impact on others as it did to me. The memorial was stunning. Flowers ranging from golden yellow tulips to crimson red peonies were a welcoming sight to offset the dark grey foundation the Twin Towers were once in. So stunning, some felt that they needed to pose in front of them for a pretty photo, as if we were at the Met Gala. Everyone has their own definition of the term ‘honoring,’ I suppose.

However, to honor those who were lost, I feel it best we recognize the consequences of their deaths, and how the American people have done both better and worse since then, if such absolute subjective terms can be placed onto the decisions made post-9/11. The American government has overthrown regimes, killed Osama Bin Laden, leader of the terrorist group Al-Qaeda, and has overhauled the entire security setup in the United States, proving the iron-tight grip that they have over international affairs.

However, just because such a horrifying and near-unimaginable thing happened to the U.S. doesn’t mean we cannot recognize the horrifying and near-unimaginable things that have been caused due to our involvement in the Middle East and due to our current polarized political language. It doesn’t make us “less American” to admit that the terminology chosen by political leaders led to hate crimes against Muslim-Americans and changed how many view those who practice Islam. Nor are we any less patriotic to question how we can be involved in government building in Afghanistan for 20 years, just for it to fall in under two weeks to the Taliban (or even, how and why the Taliban were created). How will the world be affected in 20 more years after what happened in 2001? Is this a “better world,” and how can we make sure it will be?

Maybe if those at the memorial with me chose to turn to the names carved into the monument instead of the camera, they could try to dwell on such thoughts.