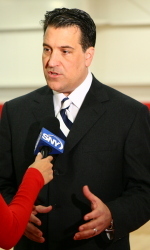 Three of the St. John’s men’s basketball team’s top incoming recruits will not be eligible for the fall semester, the team revealed in a press release today.

“We will continue to work with the NCAA in an effort to review Amir, Norvel and JaKarr’s cases regarding their eligibility,” said head coach Steve Lavin in the release.  Our student-athletes and their families have been patient and cooperative throughout this review process. We are hopeful that Amir, Norvel and JaKarr will be able to join us on the court this winter, and in the classroom when the 2012 spring semester begins.”

The release said that the team will continue to work with the NCAA eligibility center to get the players eligible for the spring semester. If they do become eligible, the earliest they could rejoin the teama would be Dec. 19.

All three players were in ESPNU’s Top-100 college basketball recruits in the class of 2011. They were part of St. John’s nine-man class that was the consensus No. 3 class in the country.

With their departures, the Red Storm are now left with just eight scholarship players for the fall semester. Junior point guard Malik Stith returns alongside the six eligible members of the incoming freshman class. Junior Jamal White, a former walk-on, is also on scholarship for the 2011/12 season.

Team spokesman Mark Fratto was unable to comment on each player’s specific academic case due to NCAA regulations, but said that the team would “pursue every avenue” to help them become eligible.