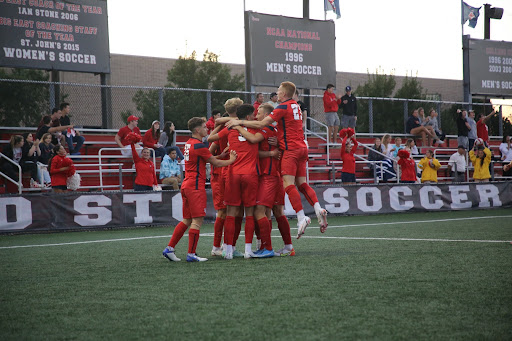 In a slate that saw the Red Storm face 10 contests, St. John’s Athletics dominated the competition. Many teams, including Men’s Soccer, Women’s Soccer and Women’s Volleyball went undefeated last week. Beyond team wins, there were remarkable individual performances that did not go unnoticed by fans.

Men’s Soccer kicked off the week with a match versus crosstown rival Fordham last Monday, Sept. 6th. Andrew Bennett scored a quick goal in the 11th minute of the match, which would turn out to be all the Red Storm needed to close out a shutout 1-0 victory. Following four days of rest, the Johnnies returned for a Friday-night matchup against Boston University. Brandon Lye kept St. John’s in the game all by himself with two early goals, and Brandon Knapp delivered the final blow with a walk-off penalty kick to defeat BU 3-2. After a successful week, Men’s Soccer is now 3-2 on the season and looks ahead to Big East Conference play beginning on Sept. 18th against Xavier University.

Women’s Soccer scored a win in their only game of the week, defeating the University of Delaware on Thursday to the tune of a 3-0 victory. Two goals by Zsani Kajan put the Red Storm ahead in the first half, and Ava Collins delivered another insurance goal in minute 59. Kajan now has an outstanding nine goals in the early season, and Women’s Soccer sits at 4-1-1.

The Women’s Soccer team was scheduled to play a second game last week versus Central Connecticut State University, but it was postponed due to COVID-19 issues within the CCSU program. The team now has a full week off to prepare for Yale University on Sunday.

Women’s Volleyball had a busy week in Queens, playing four contests and winning all of them. They began last Tuesday versus the University of Rhode Island, defeating URI in all three sets. The volleyball team then swept the Jack Kaiser Classic for their fifth-straight tournament win. They defeated Fordham, Boston College and Army on their path to victory.

The Women’s Cross Country team ran a convincing 5K race at the Fordham Fiasco, finishing second overall out of nine teams. The team was led by junior Claire Cushing, who won the event for St. John’s with a time of 19:06.5. Also scoring points for the Johnnies were Katherine Bruno (third) , Mia Forester (ninth), Hannah Huleatt (16th) and Jenna D’Onofrio (41st). It was a positive outcome for the team’s first race under new Head Coach Elliott Blount.

Looking ahead, the Johnnies hope to build upon a week in which many teams did not take a loss. Big East Conference play is ahead, and as it stands now, all University teams hold a .500 winning percentage or better. If their encouraging level of play holds, St. John’s is primed for an exciting conference slate.