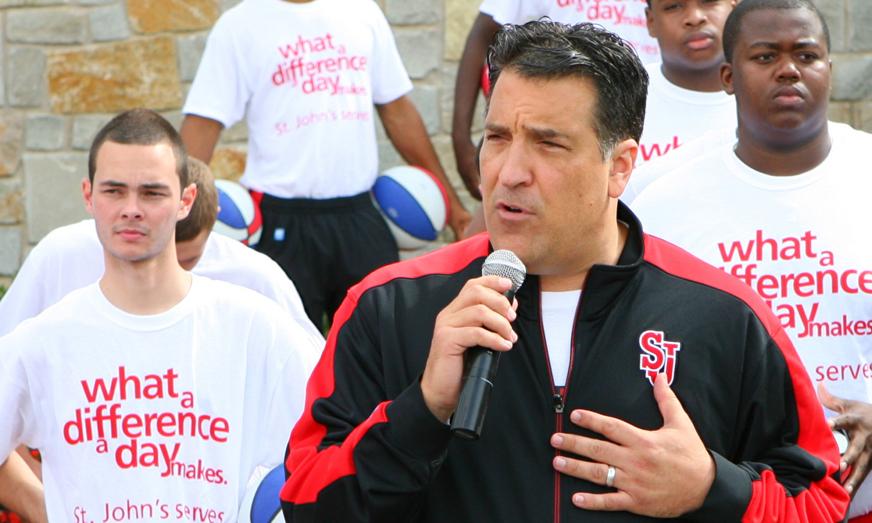 Steve Lavin’s absence for the vast majority of the 2011/12 men’s basketball season while recuperating from surgery to treat prostate cancer put a twist onto his three-year timetable to restore St. John’s to prominence.

But it wasn’t the kind of twist most people would guess, at least according to Lavin. Instead of hurting the Red Storm’s development, the 49-year-old head coach believes that his absence actually helped the long-term development of the program.

“I think our depth of personnel is probably a year ahead of schedule” Lavin told the Torch in an exclusive interview. “Ironically we were able to secure as deep a roster as our current one in part because of my being diagnosed with cancer. The unexpected setback on the health front and subsequent necessity to focus primarily on a full recuperation and our recruiting was a major factor in positioning us for landing the 2012 recruiting class.”

That diagnosis, and his comfort in handing over the reins to his assistant coaching staff featuring Gene Keady and longtime right-hand man Rico Hines, as well as associate head coach Mike Dunlap, allowed Lavin to spend his energy on the recruiting trail, to bring in a class to complement the six scholarship players that ended the season with the Johnnies.

“Once Jakarr committed, it served as a catalyst, similar to when we signed Moe Harkless in the 2011 class,” Lavin said. “There’s a certain momentum that’s created when you sign a high-level player, and other kids see, ‘Okay, St. john’s has it going on.’”

St. John’s also landed coveted big man Chris Obekpa, as well as junior college standout Orlando Sanchez and Texas A&M transfer Jamal Branch in an eight-man recruiting class that was ranked as high as No. 8 in the nation by recruiting services.

Now fully rejuvenated, Lavin has a luxury of being able to field a full team — something that Dunlap never came close to having last season, which started with seven scholarship players and ended with six.

And no longer relegated to a general manager role, as he describes it, because of his health, he can take the team in the direction he wants — like giving sophomore guard and returning leading scorer D’Angelo Harrison time at the point guard position.

Harrison, who set a St. John’s freshman record with 544 points last season (17 per game) was cited by Lavin as the team’s most improved player in the offseason — especially in the mental side of the game (make more good), and his leadership qualities.

“He’s playing at a pace where he’s seeing things with more clarity,” Lavin said. “His judgment and choices are better for when to take it to the hole and when to stop, and when to dish it.”

Harrison, Branch and incumbent starting point guard Phil Greene will have no shortage of players to pass to. JuCo transfer Marco Borgault will stretch the floor, while Sampson, Obekpa and Christian Jones — whose athletic ability Lavin lauded, will add versatility to a team that often relied on Harrison and Harkless, who is now with the NBA’s Orlando Magic, to carry the scoring load.

The increased depth was on display during team scrimmages in the summer.
“With eight newcomers, the quality of depth is the most notable change from last year,” Lavin said. “Summer workouts were fiercely competitive because our players recognize minutes will have to be earned the old fashion way this season.”

Now, with 13 scholarship players and two experienced walk-ons, St. John’s can call on 15 what Lavin called “legitimate players” — some of whom might not have been on the court had Lavin been healthy.

“You can’t script that.” Lavin said. “But its ironic that the setback on the health front was a springboard for our recruiting.