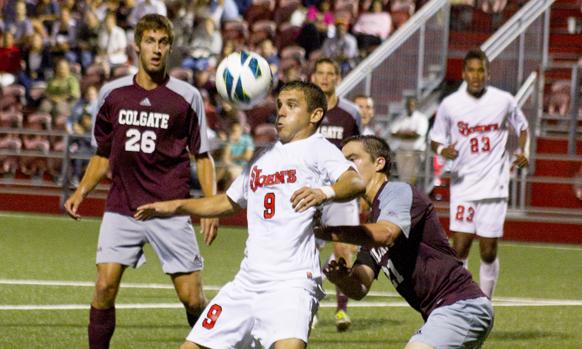 The goal came after a slow-paced first half, as both teams seemed hesitant in the final third. Despite showing confidence on the ball in their respective defensive halves, there was a lack of positive link-up play in and around the 18-yard box.
The Johnnies responded with extreme vigor as they grabbed a stranglehold of the match and kept the ball in the Colgate half of the field for a majority of the second half.

“We had a little bit more energy and made some subs that brought guys on who could hold the ball up and give us a little bit of a presence in the attacking third,” said head coach Dr. Dave Masur.

Freshman forward Daniel Bedoya began the Red Storm’s assault on Colgate’s goal in the 60th minute with a moment of individual skill after he slalomed past two defenders before unleashing a shot that flew over the crossbar by inches.

Bedoya’s near miss set a trend as a number of Red Storm players managed to direct numerous dangerous shots on target.

“Our forwards started making smarter runs behind the defense and it opened up space for our team,” explained freshman forward Jelani Williams.

However, despite the Johnnies’ dominant lead in second half shots, 11-2, they were struggling to find the back of the net. Jack Bennett squandered the Red Storm’s most noteworthy scoring chance in the 75 minute when he could only manage to aim his headed effort directly into the hands of Grant Reed even after he was left unmarked at the far post.

As the end of regulation neared, Masur signaled for Tim Parker to push forward into a more attacking role. The coach’s tactical switch almost paid off as Parker rose to head a cross from Bennett only for Reed to record his fourth save of the half.

The goal finally came in the 86th minute, when freshman Jelani Williams and senior forward Andres Vargas completed a slick move that saw the freshman score the crucial goal that sent the match into overtime.

“I just got it [the ball] at the top of the box and split the defenders, played it down to Andres, and I kept making my run. He crossed it back for me and I was just in the right place at the right time.”

As the New Jersey native trotted back to midfield after his goal, there was a palpable confidence to him, as he knew that his first collegiate goal came at the most opportune of times.

“It feels great [to score]. To be at this level and to perform is good because it’s a big step up from high school, to academy, to college. It’s a lot more physical, you’re not the biggest kid anymore.”

Despite failing to score a golden goal, the Johnnies continued to assert their dominance over Colgate as they had a 7-0 advantage in shots. Masur’s men came closest to victory after Jack Bennett’s fizzing strike from thirty yards out thumped off the crossbar.

The Red Storm travel to Columbus, South Carolina on August 31st to face the South Carolina Gamecocks as they begin their participation in the Gamecock’s Classic.