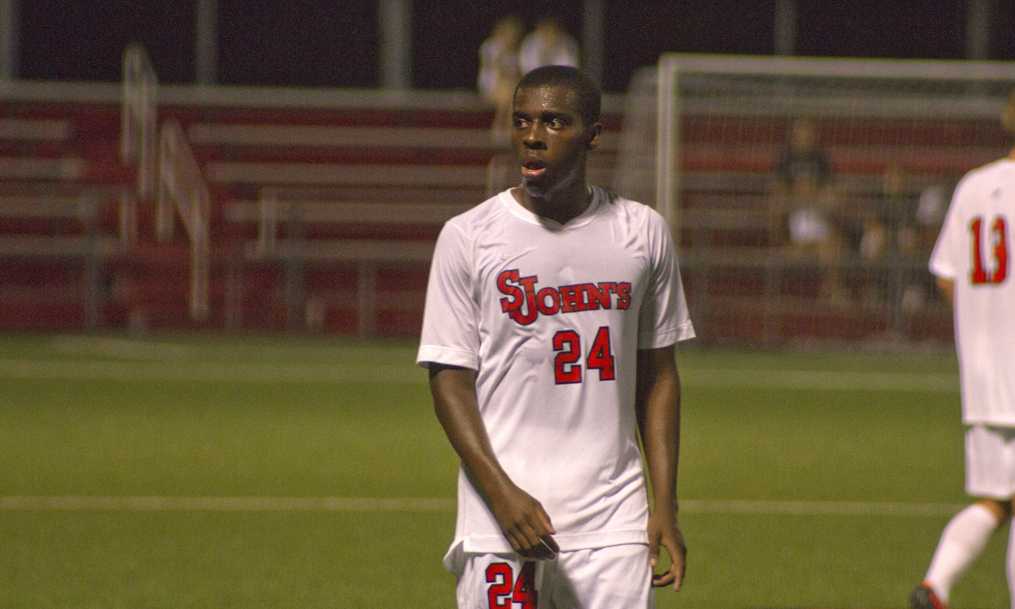 The St. John’s men’s soccer team is entering the 2012 season with just four seniors on the roster, but despite the lack of seniority in the team, the Red Storm received a No. 15 preseason ranking from the NSCAA and were tabbed Red Division favorites in the Big East preseason coaches poll.

As the Johnnies men sulked off the Belson Stadium turf last season after their 1-0 second round NCAA tournament loss to Brown University, head coach Dr. Dave Masur was forced to bid farewell to a senior class that sported current New York Red Bulls standout Connor Lade, the 2011 co-BIG EAST midfielder of the year Pablo Punyed, a consistent left back in Chris Lebo, and a seasoned forward in Walter Hines who notched six goals and an assist in 2011.

Although Masur has six returning starters from last year’s roster that were involved in the Johnnies’ record ninth Big East Tournament title, the underclassmen of the Red Storm have already proven that they are more than capable of carrying on the tradition of excellence that Masur has instilled into the team during his 22 years at the helm.

Sophomore Tim Parker is the consummate example of an underclassman enduring a larger burden of responsibility this season. Coming out of high school and into his freshman season, Parker was thrust out
of his comfort zone and forced to play right back rather than the advanced offensive role that saw him score 25 goals during his senior season at Hicksville High School.

This season, Parker has been moved to the center of defense, transforming from an athletically gifted fullback into an experienced and savvy center back that displayed a great deal of leadership in the absence of his defensive partner, senior Bjorn de Hoop in Sunday night’s game against Colgate.

“He’s [Parker] been very good at controlling [the defense] with great speed, composure, and has really been a mainstay with us this week and one of the real reasons why we haven’t been giving too much away,” said Masur.

On the offensive end of the field, two of Masur’s most renowned recruits, freshman forwards Daniel Bedoya and Jelani Williams, made a significant impact during the Colgate match.

In the first half of that game, both players saw limited minutes, but Masur entrusted his two freshmen with more time on the field in the second half, and they repaid his faith by positively influencing the game.

Bedoya’s quick feet and ability to beat his defender saw him come within inches of scoring on two separate occasions while Williams’ sheer strength and deceptive speed greatly troubled the Colgate backline and earned him his first collegiate goal.

“Jelani brings speed and strength up front. He’s still adapting with playing with a lot more organized defenses. He’s playing against teams that are physical and this is another level of execution that is expected and he did really well [against Colgate]. He learns quick, and as he works to get a little fitter and learn to get his body in better condition, he could be a heck of a player,” explained Masur.

Besides the two strikers, freshman midfielder Sean Sepe has made an immediate impact for the Red Storm as he recorded his first career assist in the Johnnies’ season opening 3-0 win over Boston University while freshman defender Gabriel Camara partnered with Tim Parker in the center of defense in the second half and two overtime periods of the Colgate match.

As Masur’s men move forward and prepare for a grueling Big East schedule in the coming months, a number of underclassmen will be sure to be main catalysts for this no. 15 ranked team that many expect to challenge for major prizes this season.

“We’re a young team, we had a lot of freshman on the field [Sunday], four [or] five,” Williams said. “We need to get our chemistry better and get a bit fitter. We just have to keep fighting and hopefully by the Big East [Tournament] we’re ready to go.”