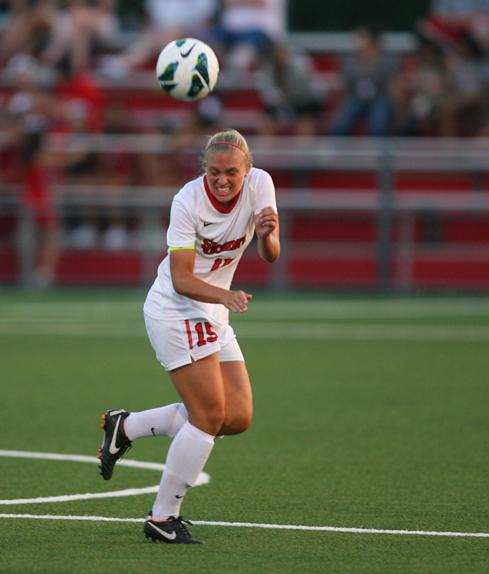 Call it a teachable moment.

After the women’s soccer team on Sunday was blown out by Stony Brook, 3-0, at home at Belson Stadium, head coach Ian Stone put his team through the ringer at practice Tuesday – putting his team outfield plaayers through sprints throughout the session.

The message? The young Red Storm have to defend their turf better.

“The issue, really, was I didn’t think we put out enough effort on Sunday,” Stone said. “We weren’t physical enough. We didn’t work hard enough to protect our house in Belson Stadium, so that was a little bit of an issue for me, and it’s not really acceptable, so that’s the message we tried to get across to the girls today.”

The loss drops the Johnnies to 2-2 on the season, and erases the positive momentum after their dramatic, 2-1 overtime win over Air Force on Friday.

St. John’s fell behind in the 35th minute to a goal from the top of the box by Stony Brook defender Caitlin Pfeiffer. The Seawolves made it 2-0 just before the stroke of halftime after freshman keeper Ellen Conway, filling in for injured starter Lauryn Ferris, misplayed a ball that bounced past her, leaving Stony Brook substitute Priscilla Wiggins with an open net that she did not miss.

Things only got worse for the Red Storm in the second half, when redshirt senior defender Megan Klement was send off with a straight red for denying a goalscoring opportunity. To add insult to injury, Stony Brook’s Kristen Baker blasted the ensuing free kick into the back of the net to make the score 3-0.