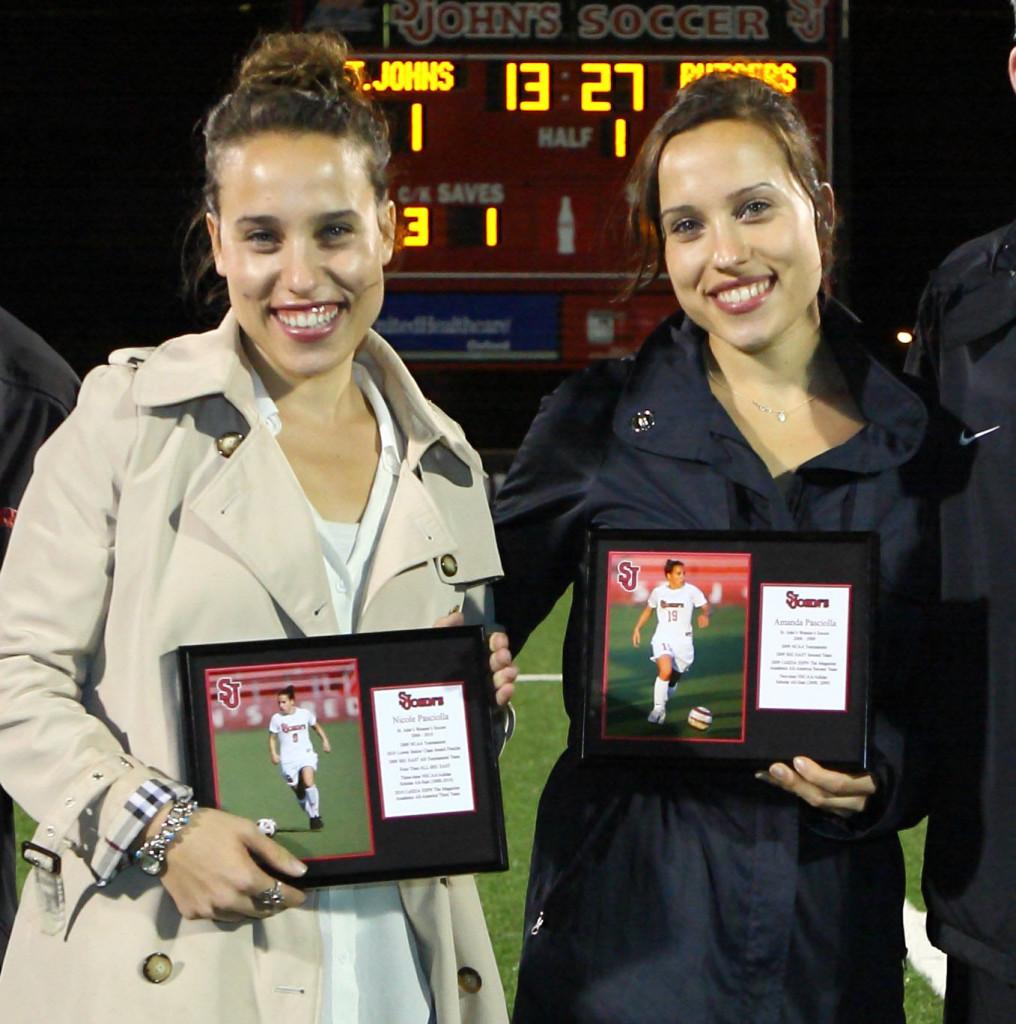 The timing of the St. John’s women’s soccer team’s first conference win of the season, a 1-0 victory over Rutgers on Sept. 28 at Belson Stadium couldn’t have been better.
A number of former Red Storm players watched the Johnnies victory over their New Jersey rivals from the VIP seats of Belson Stadium on alumnae night, including Amanda and Nicole Pasciolla, two of the most decorated players to don the Red Storm shirt.
The Pasciollas were honored at halftime with the unveiling of a banner at Belson that pays tribute to their academic and athletic success.
The twin sisters garnered a plethora of awards throughout their careers, but their most prominent achievement came during the 2009 season when they led the Red Storm to its first ever NCAA Tournament appearance.
“It boosted it [the program] to a new level,” explained Amanda Pasciolla. “It set a precedent for everyone else that was going to play us that this [team] is serious and you better come to play.”

The tournament appearance also paved the way for future recruits, including this year’s senior class, to join the St. John’s program.

“We worked very hard to get [to the NCAA Tournament],” said Nicole Pasciolla. “Players coming in realized that this is a serious program.”

However, the Pasciolla twin’s talents were not only limited to the soccer field. They were both CoSIDA ESPN The Magazine Academic All-Americans as well as role models to the underclassmen who took the reigns of the program once they graduated.
Runa Stefansdottir was a freshman during the 2009 season and credited the Pasciollas for setting an example early on in her St. John’s career.

“As I’ve evolved from a freshman to a senior, it’s made me realize how good my role models were [my] freshman year,” said Stefansdottir. “They were not only great role models on the field, but also off the field. The way they prepared and the way they came out everyday really made me want to become a great leader.”

Both Pasciollas have since graduated with economics degrees and are now employed in the men’s fashion industry in New York City.

Nevertheless, wherever their career paths take them, the Pasciolla sisters will always be grateful to St. John’s for the experiences the institution has provided them along with the honors that have been bestowed upon them.

“It means the world [to me],” said Amanda Pasciolla. “The fact that St. John’s was willing to do this makes me feel great.”

“It was absolutely amazing that St. John’s did that for us,” Nicole Pasciolla added. “I miss playing and I miss St. John’s so much.”