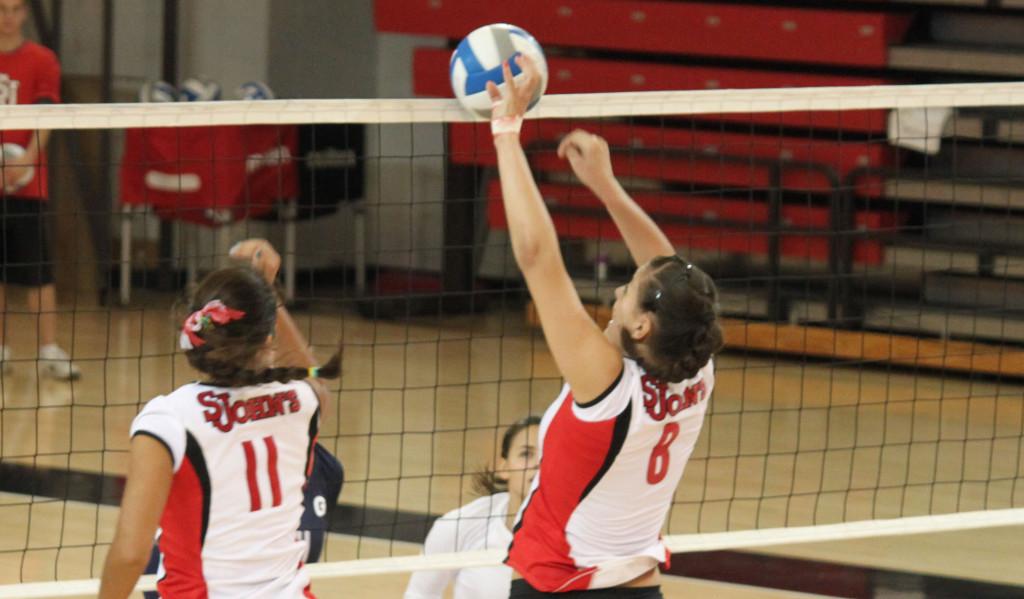 The St. John’s volleyball team utilized a unique mix of upper and underclassman to defeat the Connecticut to remain
undefeated in conference play.

Despite the sweep the team had to fight off Connecticut (11-7,2-1) pressure all afternoon in front of 197 at Carnesecca Arena, including a furious rally in the first set after the Johnnies took a nine-point lead.

“We were able to use the energy from our fans and that helped us work as a team and fight through,” said sophomore
Ashley Boursiquot.

Boursiquot along with senior Milicia Krstojevic led the Red Storm in kills with 10 apiece while senior Sabina Piegza contributed 36 assists. Boursiquot also posted a .909 attack percentage, her highest of the season.

The Huskies attack was paced by senior Mattison Quayle who flew around the floor all day, contributing 12 kills in the loss.

Close matches are nothing unusual for the two teams as each of their last four matches have gone into at least four sets.

“Every Big East team is a rivalry, but when teams like UConn and St. John’s get together it’s a little more special, because we’re a couple of the originals,” said St. John’s head coach Joanne Persico.

The Red Storm and the Huskies both came into the match undefeated in conference play and with the win St. John’s now has tripled their total Big East wins from a season ago.

Out of 16 total Red Storm players 11 are freshmen or sophomores which, combined with the veteran leadership of Piegza, Krstojevic and labero Gabriela Petkova make for a very successful mixture.

“This team is very young and I am really proud of them and what they have been able to accomplish,” said Persico.

The team knows they have a long road ahead, but believes the sky is the limit.

“I think we could go really far” said Boursiqout. “Hopefully [we] win the Big East and make the NCAA tournament, our motto is ‘start strong and finish strong.’”