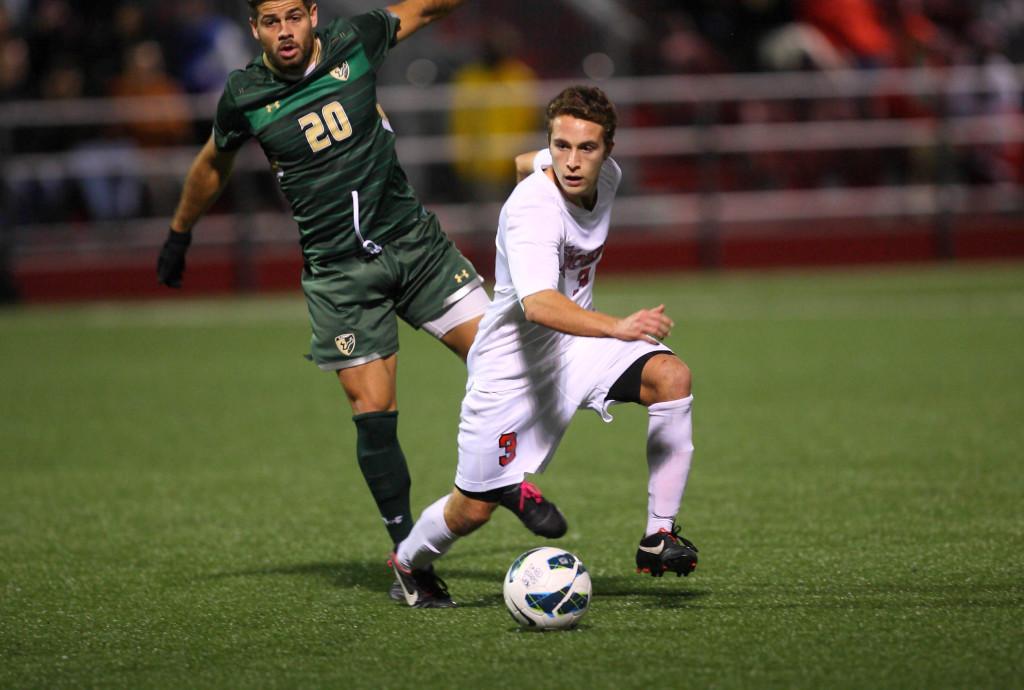 Despite outshooting its opponent 15-2 in the second half, the St. John’s men’s soccer team couldn’t overcome a 2-0 first-half deficit, falling to USF 2-1 at Belson Stadium on Saturday.

Senior defender Jack Bennett scored in the second half to give the Johnnies life, but saw a penalty kick in the 76th minute saved by South Florida keeper Dallas Jaye to deny the Red Storm a chance to keep its hopes of earning a first-round bye in the Big East Tournament.

South Florida held on despite the second-half onslaught that appeared even greater to the players than the discrepancy in shots suggested.

“I think we outshot them 19-5 in the second half but the score line didn’t reflect that,” Bennett said, exaggerating the totals.

“We kinda hung in there and played pretty well,” said St. John’s head coach Dave Masur. “We’re pleased that we took the game to them and had some good chances.”

The loss drops them to fourth in the Big East Red division — four points behind second-place Syracuse and seven behind first-place Louisville, who have wrapped up both first-round byes in next week’s conference tournament.

The Red Storm (9-3-4, 3-3-1) got off to a tough start after a foul committed by Jamie Thomas in the sixth minute set up a USF (8-4-4, 2-2-3) free kick just outside the Johnnies’ box. Midfielder Roberto Alterio took the ensuing kick and whistled the ball around the St. John’s wall and into the lower right post to give the Bulls a 1-0 lead.

The Red Storm were not discouraged by the early deficit and kept up their wok rate on offense. Freshman Danny Bedoya looked to level the game after he dribbled by two defenders in the box, but his attempt went just wide. This was his second failed attempt to score after USF keeper Dallas Jaye blocked his first shot in the third minute.

The Bulls took a 2-0 lead in the 21st minute, leaving the mouths of St. John’s fans agape. After a corner kick, Wesley Charpie took advantage of a loose ball 8 yards out and sent it to the inside left post.

The Johnnies, fighting frustration, continued to work down the field and pressure the Bulls’ defense, but could not find a goal.

The Red Storm started the second half with much more aggression than the first. This was apparent in the 62 minute when senior Jack Bennett chipped the ball out of the keeper’s reach, cutting the deficit in half. The goal awakened a previously downtrodden home crowd.

“We were fighting hard in the second half,” senior forward Andres Vargas said. “We let a couple chances go but we kept pushing hard.”

The Red Storm will finish their regular season at Belson Stadium against Syracuse on Oct. 26.