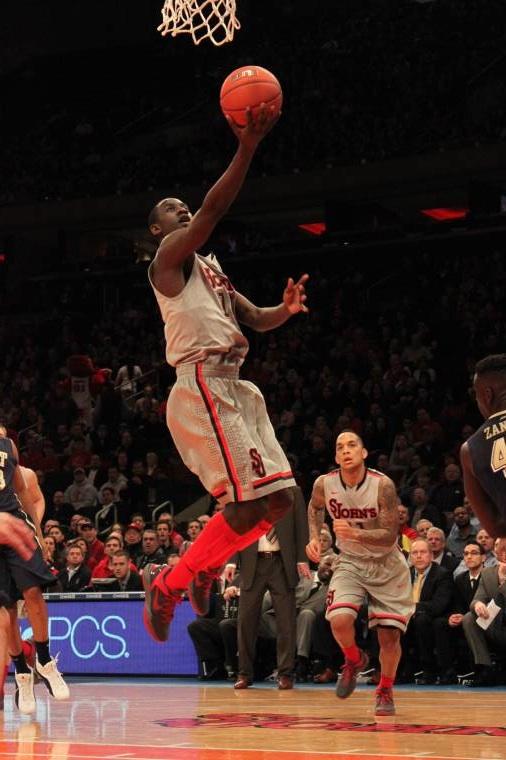 The St. John’s men’s basketball team is hoping do “to do something special come March,” as head coach Steve Lavin puts it time and again, but the NCAA tournament looked like a distant dream as the Red Storm (16-11, 8-7) fell to No. 20 Pittsburgh (21-7, 9-6) after a second half disappearance 63-47 at Madison Square Garden.

The Johnnies had the game within reach as they trailed 30-27 at halftime before they came out and promptly grabbed the lead to open up the second portion of the contest. That didn’t last long, however, as St. John’s committed nine second-half turnovers to hand the Panthers  a victory.

“Statistically there isn’t a huge difference in any category other than the 17 points off of our turnovers,” Lavin said.

The Red Storm out-paced the Panthers in rebounding by one at 38-37, which Lavin noted, but that wasn’t enough to offset a poor offensive performance where the team scored its lowest point total of the season. Sophomore D’Angelo Harrison, the team’s leading scorer this season, went 1-12 from the field and scoreless in the second half.

“It’s just missing shots,” Harrison said referring to his game. “All kinds of people go through this. You just move forward.”

Pittsburgh dug itself into a hole early in the second half by allowing St. John’s into the bonus with foul shots with 12:52 left. But after that, the Panthers kept the Red Storm off the line by only giving up two fouls the rest of the way.

“We didn’t take advantage when we got in the bonus early in the second half by not getting ourselves to the foul line more often,” Lavin said.

Freshman JaKarr Sampson led the team with 14 points and added six rebounds. Sophomore Phil Greene followed that up with 11 points while playing all 40 minutes, while sophomore Sir’Dominic Pointer contributed all around with six points, eight rebounds and three assists.

Tray Woodall led the Panthers with 25 points on 8 of 14 from the field including 4 of 7 from three-point range. Lamar Patterson scored 11 points with six boards.

“We squandered this opportunity here in the Garden against a good Pittsburgh team,” Lavin said. “We need to get some wins both in the regular season and in the conference tournament if we’re going to have an argument for us being in the NCAA tournament.”

Jamal Branch played for the first time following his Feb. 2 MCL injury against Georgetown. He played three minutes while wearing a knee brace.

St. John’s wore new gray uniforms for the first time on Sunday. The jersey variation joins a collection of white, red and black Nike designed Red Storm jerseys in use.