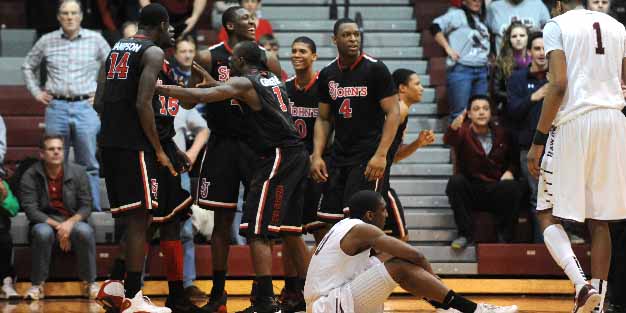 The St. John’s men’s basketball team lived to see another day as Sir’Dominic Pointer made a last second step-back fade away
shot to down Saint Joseph’s 63-61 in the first round of the NIT tournament at Hagan Arena in Philadelphia, Pa.

“He deserved a high point given the degree of how bad he felt for embarrassing our program and our school and letting his teammates down,” St. John’s head coach Steve Lavin told reporters after the game. “It was poetic justice he hit the buzzer-beater.”

That’s when Pointer proceeded to take the ball the length of the court before taking an off-balance jump shot before the buzzer sounded. The points counted and the Johnnies saw their season get extended, while the ever-living Hawks (18-14, 8-8) bowed out into the night.

“I never hit a shot like that in college,” Pointer told reporters after the game. “It just felt good. To celebrate it with my teammates was even better.”

The Red Storm fell behind immediately as the Hawks took a 6-0 lead to open the game. St. John’s failed to score a basket until more than three minutes into the contest and only grabbed one more lead, at the 12:07 mark, before the aforementioned 3:15 mark comeback at the end.

Sophomore Phil Greene and freshman Chris Obekpa were benched to start the game because they were late to the team meal earlier in the day. Freshman Christian Jones and freshman walk-on David Lipscomb started in their place. Lipscomb saw four minutes of action in the first half of the team’s loss to Villanova in the Big East tournament.

Carl Jones scored a game-high 21 points for Saint Joseph’s, while Langston Galloway contributed 16 points.
The victory was the first in the postseason since 2003 for the St. John’s program.

“Tonight’s win was a total team effort by our young Johnnies,” Lavin said in a press release. “I’m really proud of our kids’ resiliency and resolve in finding a way to get a well-deserved victory. By advancing to the next round of the NIT, our young team will continue to gain valuable postseason experience.”

The team’s journey continues with a match-up against No. 1 Virginia at John Paul Jones Arena on a date TBD.