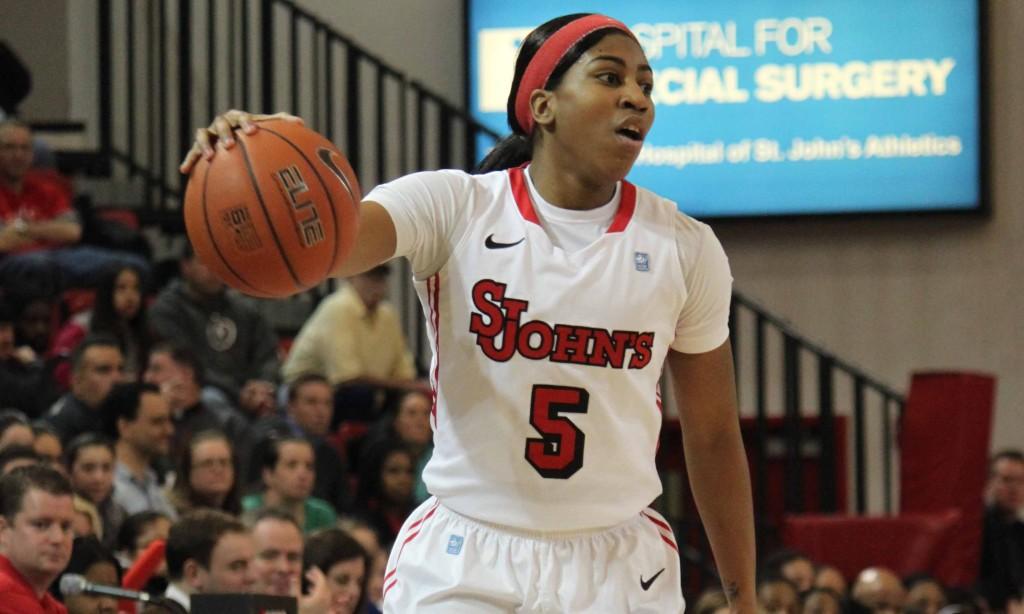 St. John’s suffered a crushing 96-90 defeat to Dayton in the first round of the NCAA Women’s Tournament at Carnesecca Arena on Sunday that effectively ended their season.

The game extended into two overtimes as the Red Storm (18-13, 11-5) overcame a 13 point deficit, but ran out of gas as the game headed into the second overtime.

This loss also ends the careers of Nadirah McKenith, Shenneika Smith, and Mary Nwachukwu. Smith and McKenith both played a role in the Johnnies’ string of four NCAA tournament runs from 2009-2013.

“I’m just at a loss for words right now,” McKenith said. “It hurts deeply. I played my last college game here, but I know it’s going to be a great program and I’m just so proud of the way my team fought.”

The Flyers (28-2, 14-0) made their move on the Johnnies midway through the first period after they sank a three to take an eight point lead, which would soon be followed by three more baskets from the perimeter to extend the lead to 12 with eight minutes remaining.

St. John’s was unable to threaten Dayton from behind the arc as the Flyers shot 7 for 12 in the first half.

“We let them do what they’re good at early,” St. John’s head coach Joe Tartamella said. “They made 3’s and when a team gives up seven 3’s it’s hard for them to win. So I thought they did a good job at getting what they were good at early.”

Dayton’s Andrea Hoover was the major contributor for her team in the first 20 minutes of play. The sophomore was hardly touched by the Red Storm’s defense and recorded 16 of her 24 points in the first half alone, also sinking all four of her attempts from the three.

Coming into the second half, the Johnnies were down 13 and their home court advantage seemed to be dissipated by Dayton’s offensive performance. As Dayton matched St. John’s shot-for-shot, it seemed that the season would end for the Red Storm as the saw themselves down by 13 with five minutes remaining – but Ashley Perez sparked the Johnnies’ offense as she three.

“[Ashley Perez] came in big for us today,” Smith said. “Even though it didn’t come out the way we wanted, she was tremendous.”

St. John’s ended the remaining four minutes of half on an 18-8 run, including another clutch shot from the perimeter by Perez and a layup from McKenith in the final seconds to send the game into overtime.

“I never thought, probably throughout the whole game, that we weren’t going to come back and knew that we had a run in us,” Tartamella said.

With the raucous crowd roaring for St. John’s, Perez opened the first overtime with another three to give her team a quick lead, but that was immediately answered by Dayton. The period saw both teams match each other’s shot, which pushed the game to a second overtime.

Exhausted emotionally and physically, the Red Storm had nothing left in the tank to hang around Dayton after the second overtime began, as the Flyers went on a 7-0 run to take an unassailable 6 point lead.

Despite the crushing defeat, Tartamella praised his team after the game and encouraged them to walk off the court with pride.

“We left everything we had on the floor,” he said. “I can’t say enough about these players. I couldn’t be happier about this group, the way we finished, and I’m really proud of them.”