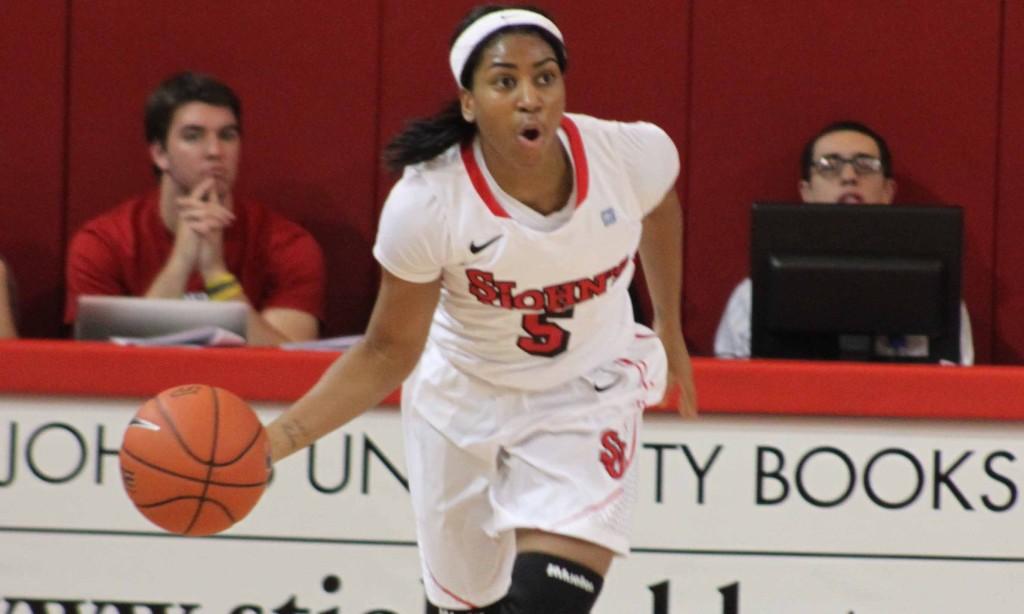 Nadirah McKenith and Shenneika Smith made history as a pair throughout their four years together at St. John’s. Now, the two will be split up by the WNBA draft, each player looks to create their own individual legacy as a pro.

McKenith got a head start on Monday Night, as she became the first player in history to be drafted into the WNBA from the St. John’s women’s basketball program. Selected #17, the point guard will travel to Washington as she looks to take the helm of the Mystics.

“I was with many family members,”  McKenith said, “When my name was called I was in total shock to be even considered into the WNBA.”

The Washington Mystics ranked tenth, among a league of twelve, in assists in the 2012 season. McKenith, the all-time leader in assists at St. John’s, demands attention from her teammates and directs them from the floor; an intangible attribute welcomed by her new teammates.

Along with McKenith, the Washington Mystics also picked up Emma Meeseeman and Ohio State shooting guard Tayler Hill, who was the number four overall pick.

The three rookies will look to turn around a struggling franchise that finished a combined record of 11-57 in the past two seasons.

Smith was given reason to celebrate on Monday night, too. The shooting guard will not have to travel far to be with her new team, as the New York Liberty selected her in the 3rd and final round as the 25th overall pick.

“I was like `Wow, I get to stay home.’ Smith said, “My mom was crying because they thought I would go somewhere far away. So being drafted by the Liberty was a great feeling, it was pretty awesome. I am still in shock, I still can’t really believe it yet; but I am excited. It is a different kind of excitement.”

Smith led St. John’s in scoring in her final three seasons, and averaged a career high of 16.7 points per game in her final season. In addition to being one of the best scorers in the program’s history, she ranks highly in St. John’s history, Smith is third in blocks, fourth in scoring, and fifth in rebounding.

Meanwhile the Liberty finished last season 15-19, will rely on their newly acquired players to bring them back to the playoffs. Smith, officially the
second St. John’s player ever to be drafted into the WNBA.

The pair remain teammates until they graduate this year, and then they will part ways as they each prepare to make a name for themselves in the pros.