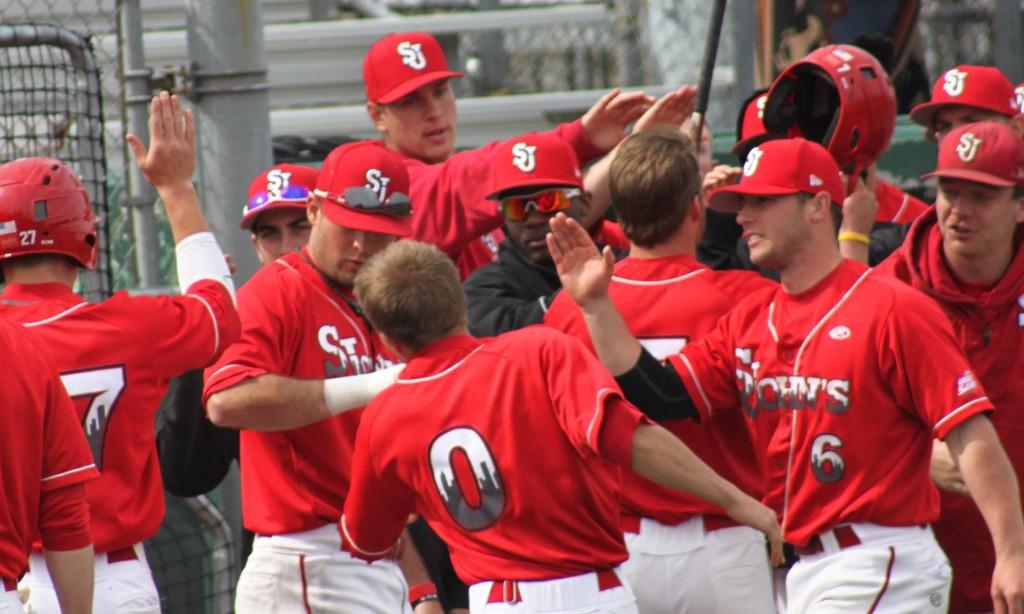 St. John’s finished their weekend series against Louisville with a 6-5 win, and taking the best of three series. The Red Storm (18-23, 7-8) benefitted from a four-run eigth inning before closing it out in a dramatic ninth.

Red-shirt freshman Ryan Horstman got the start for the Johnnies, but poor fielding gave him and his team trouble early in the game. The Cardinals (30-9, 8-4) were first to get on the board in the top of the second inning when senior third baseman Sean O’Hare fumbled to pick up the ball from a bunt.

The Red Storm answered in the bottom of the third when senior Pat Talbut got a two-run single up the middle. Although only batting 1 for 5 on Sunday, Talbut delivered the crucial hit to put his team in the driver’s seat.

The time of the game shifted in Louisville’s favor when they drove in three runs in the 6th inning. The Cardinals capitalized on errors from
misguided throws by sophomore second baseman Bret Dennis and on senior catcher Danny Bethea.

Horstman was pulled following that three run inning. The left-handed pitcher gave up four runs, but only two earned, and struck out three.

Louisville would give themselves a four run cushion after a home run in the 7th inning, given up by freshman Joey Graziano, who was ultimately credited with the win  in 2.1 innings pitched.

Seemingly down-and-out, the Johnnies found their offensive power in the bottom of the eighth. O’Hare drove in a run and senior DH Jimmy Brennan cut the lead down to two, which soon became a one-run lead after red-shirt junior Martin Kelly brought in a pair of runs after a line drive with two outs.

“We didn’t play pretty today but they rallied and grinded it out with bats in the eighth inning against kids pitching in the national team which is quite an
accomplishment,” head coach Ed Blankmeyer said.

The ninth inning proved to be no less tense as the Cardinals were able to get three runners on base after freshman reliever Thomas Hackimer hit two batters. Bethea was able to tag the second player out after the runner was trying to reach home, and Alex Katz closed the game out after he retired the final batter with a groundout to second base.

“We’ve been through it. We lost a ball game on it opening night,” Blankmeyer noted on his team rallying despite several errors. “It’s the pressure of the game.”

St. John’s will play next on April 24 when they travel to Boston College.