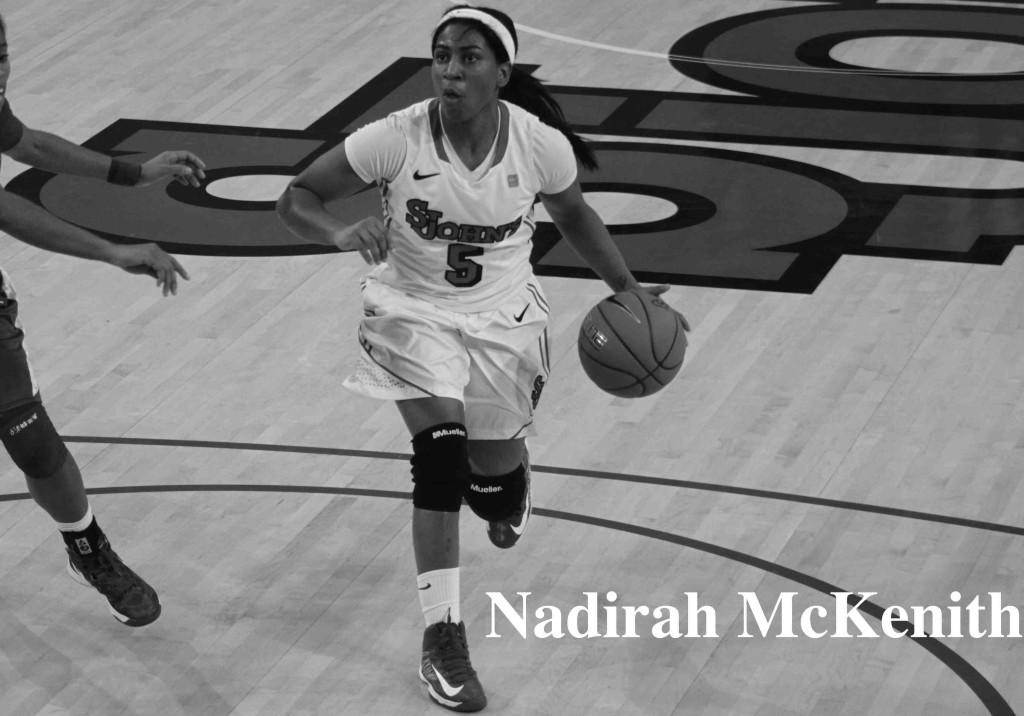 Seniors Nadirah McKenith and Shenneika Smith made history for the women’s basketball program this year as they became the first two players from St. John’s to get selected in the WNBA draft.The Torch sat down with both players and discussed their time at St. John’s and the legacy they will leave behind.

Torch: What was the reaction when you and your family found out you were drafted?

Nadirah McKenith: It was just joy and excitement. I mean we were very blessed to watch it together and hearing my name, everybody was just excited jumping up and down; screaming and hugging me. It was a wonderful moment.

T: What’s it like to be the first player in the women’s basketball program to get drafted?

NM: It’s a great accomplishment, I mean it feels great. It means a lot for the program and specifically say that St. John’s is definitely back on the map and we’re getting a lot of recognition now that there are two players are drafted. So it means a lot.

T: What do you think was the defining moment or game of your college career?

T: What kind of a legacy do you think you’ll leave behind after you graduate?

NM: I think it’ll be a great legacy. I hope everyone will remember me as though we’ve went to the NCAA Tournament four times in a row, being the all-time assists leader [at St. John’s], beating some of the top teams in the country. I think I left a great legacy here.
Torch: What was the reaction when you and your family found out you got drafted?

Shenneika Smith: I was shocked. I was projected to be drafted but no one really knows what’s going to happen. So when my name was called I was shocked and my mom cried, my dad cried, and everyone was just really happy for me.

Q: Did you ever think you would be playing for the WNBA when you were in high school?

SS: Nope. I didn’t really think that until my sophomore year in college. That maybe I have a shot at playing for the next level. In high school my coach said I’ll be good enough to play one day but everyone says everything. So one day I knew it was going to happen but when it happened I was like ‘Wow.’

Q: What do you think is the best part about your game that you’re excited to showcase in the WNBA?

SS: That I can play really good defense and that I can probably defend anyone. They might go score but it’s going to be really hard, I’m going to make it really difficult [for them]. I’m just going to try to bother them, my versatility.

Q: What do you think was the defining moment of your college career?

SS: I don’t know. I know that every year we made the tournament; that defines a lot. I mean we went in as underdogs and come out not what people were expecting of us.

Q: What are you going to miss most about the women’s basketball program here?

SS: Everything, just the teachers make you successful and I’ll definitely miss Coach T. I’ve known him for four years and he recruited me so I’m probably going to miss him a lot. But, everything, St. John’s has done so much for me. I’m really going to miss this school. But I’m close to school so I’m going to get to see them sometimes.