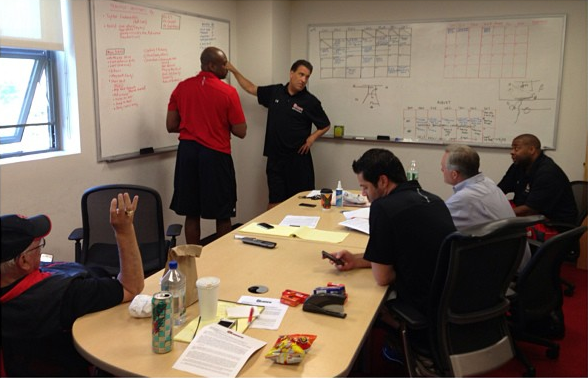 The coaching staff prepares for Europe.

The men’s basketball team announced the hiring of Jim Whitesell as an assistant coach and the movement of former assistant Darrick Martin to the role of Director of Basketball Operations on Monday.

Whitesell served as the Associate Head Coach for Saint Louis University for two years, before which he spent  24 years as a head coach at all three NCAA division levels.

“I am very excited about joining the St. John’s basketball family,” Whitesell said in a statement. “SJU has such a fantastic Basketball tradition. The opportunity to work with Steve Lavin and his staff is incredible as Steve is building a very special program at SJU.”

Whitesell, who was hired at Saint Louis by the late Rick Majerus, joins four-year assistants Rico Hines and Tony Chiles.

“Coach Whitesell joining our basketball family gives our staff more than 110 years of combined coaching experience,” Lavin said. “We are pleased to have Jim on board as a Johnnie.”

The announcement of Darrick Martin’s move to Director of Basketball Operations comes a week after the program announced the resignation of Moe Hicks. Hicks came to St. John’s as part of head coach Steve Lavin’s first staff, but wishes to return to coaching, a release said.

“It has been a great experience working at St. John’s under Coach Lavin,” Hicks said in a statement. “He has built a national program and I wish him and the team all the best.”

The Johnnies will take a trip to France, Italy and Spain for two weeks in the latter half of August. That period will give the team extra practice time that wouldn’t be permitted otherwise.