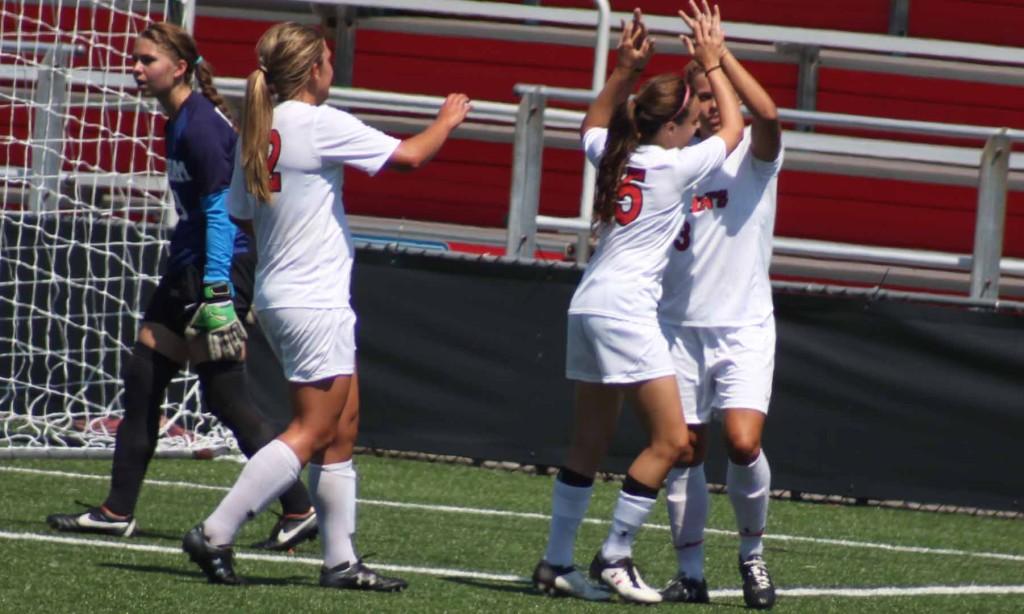 Rachel Daly is congratulated by her teammates after scoring one of her three goals.

Red-shirt freshman Rachel Daly had a day to remember Sunday, scoring a hat trick in a 5-0 victory over Fordham.

Daly scored all three of her goals before the 21-minute mark in the first half. She found the back of the net in the third, ninth and 20th minute.

“It is absolutely surreal,” Daly said. “I have been waiting for this day for a long time now.”
Daly scored her first goal off of a combined assist from Amy Marron and Rachel Hoffman.
Her second goal came at 9:19 into the game where she was also assisted by Hoffman again. She notched her third after recouping from a strong challenge, forcing her to come out of the game
momentarily.

“After a day like today I feel really great that we got Rachel to come here and she has great potential to get even better,” said head coach Ian Stone.

The Red Storm (2-0-0) offense continued its hot start as senior Hailey Hemmer slotted home after controlling a ball that hit the cross bar after a Chelsey Martino shot. The goal came five minutes after Daly clinched her hat trick.

The first half onslaught ended in the 42nd minute after a Fordham (0-2-0) own goal following a Marron corner kick. The Johnnies’ defense stayed strong the rest of the game and kept a clean sheet behind solid upperclassmen leadership.

“The senior leadership we have on this team is really great,” Stone said. “Our leaders will keep the other girls from getting overconfident after a win like we had today.”

The Johnnies will try to keep their perfect record alive as they’ll travel to UMass on Aug. 29.