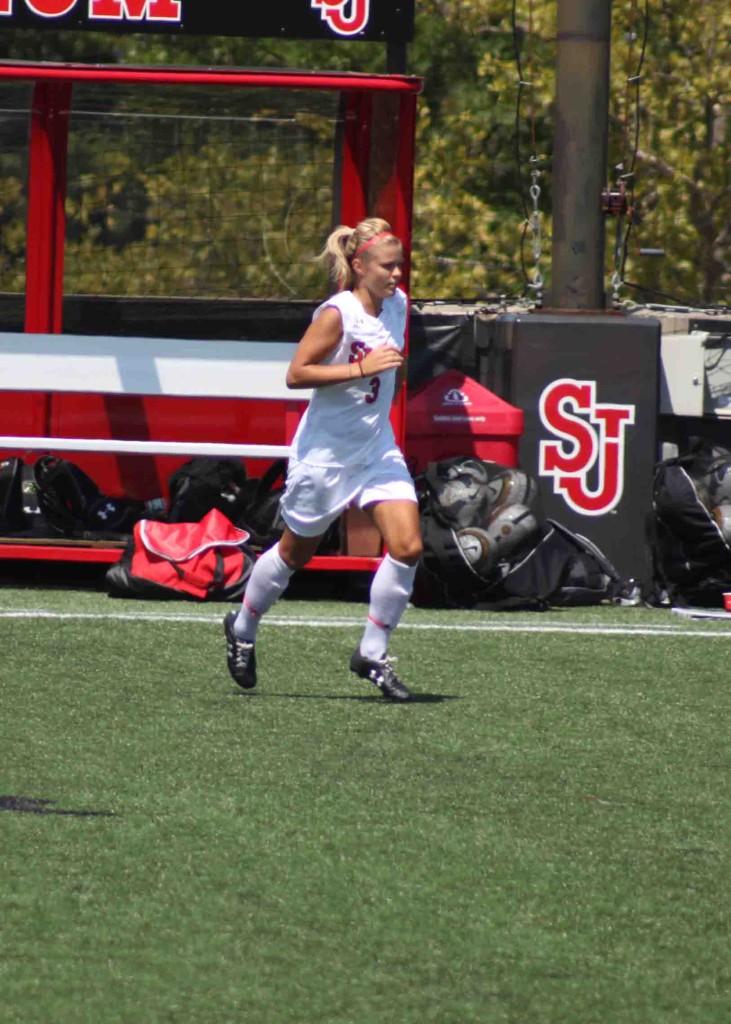 Known as ‘The English Spa’ during the Georgian Era, Harrogate has been the spa city of North Yorkshire. Located on the West Riding of Yorkshire, Harrogate  was once the best for its spa water that contains iron, sulfur, and common salt. In the 17th and 18th centuries, ill visitors would visit Harrogate because of the ‘chalybeate’ waters that contained iron.

Three thousand six hundred and twenty five miles and 213 years later, Harrogate has another cause for attention. On the campus of St. John’s
University, Rachel Daly has been the ‘Hey did you hear?’ story of the year through seven games with the Red Storm this year. So far, Daly has scored a nation best 11 goals including two hat tricks while also leading the country in points with 24 and has been named the Big East offensive player of the week twice.

Just how impressive is her start? It comes only a year after St. John’s went 6-10-1 and  scored a total of 16 goals. The leading goal scorer was Emily Cubbage with three. Cubbage also lead the team with eight points. Daly has already shattered that mark and has been a big influence on the team after sitting out last year due to NCAA regulations due to  playing oversees, she is listed as a sophomore instead of a red-shirt freshman and only has three years of eligibility. While sitting out an entire year can be frustrating for any college athlete, Daly said she doesn’t dwell on it.

“I think it was a blessing in disguise, not playing for a year,” Daly said.

“Because I got to focus on my studies and see what actual college life was out here and how to be a student athlete so I was still involved in everything just not playing. It definitely prepared me well for going into the season. I played in the summer too so I came in quite ready.”

Daly was more than ready. In her second collegiate game, Daly scored not only her first career goal but also her first career hat trick all in the first half. In only two games, Daly already tied her teammate’s previous season high in goals scored.

Flash in a pan right? There’s no way she could do it again right? Wrong. In her follow up game she scored the game winning goal on a penalty kick – her fourth goal of the year which led St. John’s over UMass 1-0.

If there was any law of averages to be played out it certainly hadn’t happened yet. She scored her second hat trick against Brown in a 4-0 rout on
Sept. 8. In the seven games that Daly has played she’s scored in five of them, the two games she failed to score were the opener against Delaware (even though she did assist on a Morgan Tinari goal) and Sunday against Ohio State.

She may not be recognizable around campus. She’s not very tall, not very muscular and blends in to her surroundings, so it’s no wonder why most of the soccer world didn’t know about one of the more dynamic soccer players on the planet right now. However there was one man who said he saw the potential for the rising star.

“I knew about Rachel,” head coach Ian Stone said. “It was tough initially to get her eligible and the way it worked out was that she had to sit out last year so that to an extent was a little more frustrating the fact that she had been practicing for us and couldn’t play, and I’m sure it was very frustrating for her too. She’s a phenomenal soccer player so it was kind of almost the final piece to the jigsaw puzzle in that we had everything else in place but obviously someone who can score goals in her place is valuable.”

While Daly has been stealing headlines,  senior Amy Marron has been a key to Daly’s success. On Daly’s 11 goals, Marron is responsible for six of them. Marron knows how good of a player Daly is but there are a lot of intangibles as well.

“From the beginning we really connected well together right from the start,” Marron said. “Having that connection as forwards is important because it’s hard to learn. You can’t teach someone to get along well with someone and have the same mind set. So I think we both share that, it’s easy, we have a good bond off the field so it’s easy to connect in a game and just the confidence I have in her to know that she’ll score. It’s much easier, it makes my job to get her the ball in those positions.”

Daly said she felt that the off-the-field connection helps with on-the-field performance.

“Playing with Amy is good because she literally just finds me from nowhere,” Daly said. “I don’t know how she finds me but I think 95 percent [Actually 55 percent] of my goals have come from her assists so we do have a little bit of a connection and we work on it in training a lot.”

Daly played club ball for the WPSL’s LA Strikers in the summer. While she was with the Strikers she played defense and says she felt that it was an asset to her growth as a soccer player and as a scoring threat.

“I was a defender for the last five years of my life,” Daly said. “So going into forward I was always, ‘If you don’t score you suck.’ I’m quite positive with myself so I tell myself that I do need to score and that it just so happens that I’ve done it every game so far. So I guess it’s working.”

With those 11 goals, Daly is tied for fourth on the list for most goals scored in a single season at St. John’s with Crisitin Burtis. Burtis also holds the school record for most goals scored in a single-season she set in 1994. Second on the list is Adriana Viola with 15 goals in 1989 and
Dominica Reina is third with 12 goals in 2002. Stone took over the head coaching job at St. John’s in 1994 and had a front row seat to witness Burtis and Reina.

“Crisitin Burtis had the same type of mentality as Rachel in that she wanted to be a difference maker,” Stone said. “Goal scorers are a little bit of a rare breed they want the pressure of for example taking the penalty kick, or having the game on the line, and they want to be the people that win it. So certainly Crisitin had that. Dominica was different in that Dominica wasn’t a complete soccer player as the other two but she was closest to Rachel in that she was a natural goal scorer. I think to an extent Rachel has surprised herself but she’s put all the work in over the years to be very good in all the techniques of the game.”

The record does seem to be within reach for Daly, who would feel honored to have her name next to a couple of St. John’s greats.

“It would mean the world to me,”  Daly said. “Especially in my first season, obviously I missed out on it rookie year, so to set some form of record would be amazing for me so I strive to get past the 17 goals and make sure I get on there.”

While Daly has the opportunity to be one of the most prolific goal scorers throughout her career, Daly hasn’t forgotten that there is no I in team and for right now, she doesn’t have her sights on breaking any record but instead how far her team can go.

“As long as we’re winning and we get to where we want to be then I’m happy with that but if I’m scoring goals and setting records it’s just an added bonus.”