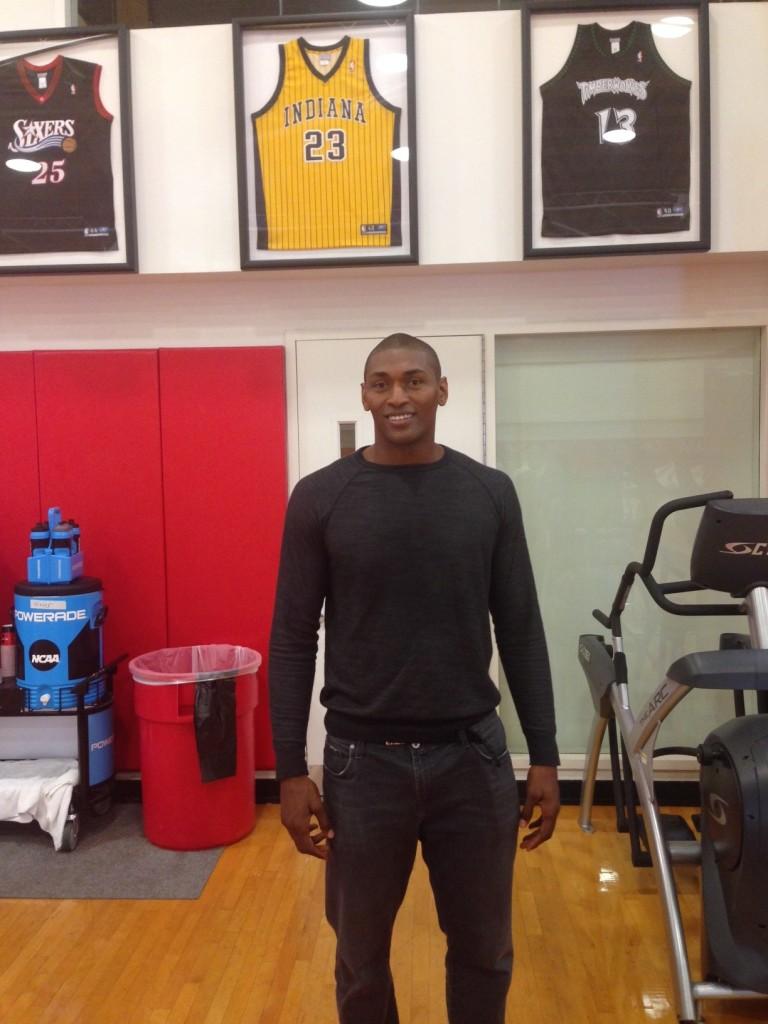 The University received a visit from New York Knicks forward and former St. John’s star Metta World Peace on Thursday, who says he is “excited” about his collegiate basketball squad.

World Peace, formerly known as Ron Artest, went to the University to speak with members of the men’s basketball team. He played for St. John’s from 1997-99, taking St. John’s to the Elite Eight in his final season.
Asked about his campus visit by The Torch during Knicks media day on Monday, World Peace said he feels the team prospectively has “six pros” on the roster. He also is ecstatic about men’s coach Steve Lavin, who he feels has “turned the team around” and “energized” the basketball program.

The Queens-born star played two years at St. John’s before bolting to the pros and getting picked 16th overall by the Chicago Bulls in the 1999 NBA Draft, famously passed over one pick earlier by his hometown Knicks, who selected Frederic Weis.

After stints with the Los Angeles Lakers, Sacramento Kings and Houston Rockets, and one name change later, World Peace says he is happy to finally call New York home again. Playing for the Knicks also gives him a chance to see his Johnnies play in person for the first time in a while.

During Knicks Media Day on Monday, Peace mentioned his desire to go to one of the men’s basketball games. However, he cautioned that he wouldn’t guarantee it because it’s “easy to get caught up in too much” in New York City, and he wants to guard against too many distractions.

“I’m excited to see them play and see a couple games when I have time,” World Peace said. “Hopefully I can make it to a game, preferably a championship game.”

World Peace is best known for his hard-nosed play on the court, and flamboyant behavior and eccentric responses off the court and he didn’t disappoint Monday; he asked reporters if St. John’s was still in the Big East.

His question turned into a playful remark that Knicks teammate — and Syracuse University-product — Carmelo Anthony pounced on when asked about the former Big East rivals.

The Knicks play home games Dec. 14 and 16, so both World Peace and teammate Carmelo Anthony could be around for the St. John’s-Syracuse game on Dec. 15 at Madison Square Garden.

Attending games as a fan could only be the start of getting more involved.

At a book-signing event for his children’s book titled Metta’s Bedtime Stories on September 18 in Tribeca, he told a group of fans during a Q&A session that he envisions himself with a new title at St. John’s after he retires from basketball.

One day, World Peace said, he just might be interested in coaching the St. John’s men’s basketball team.