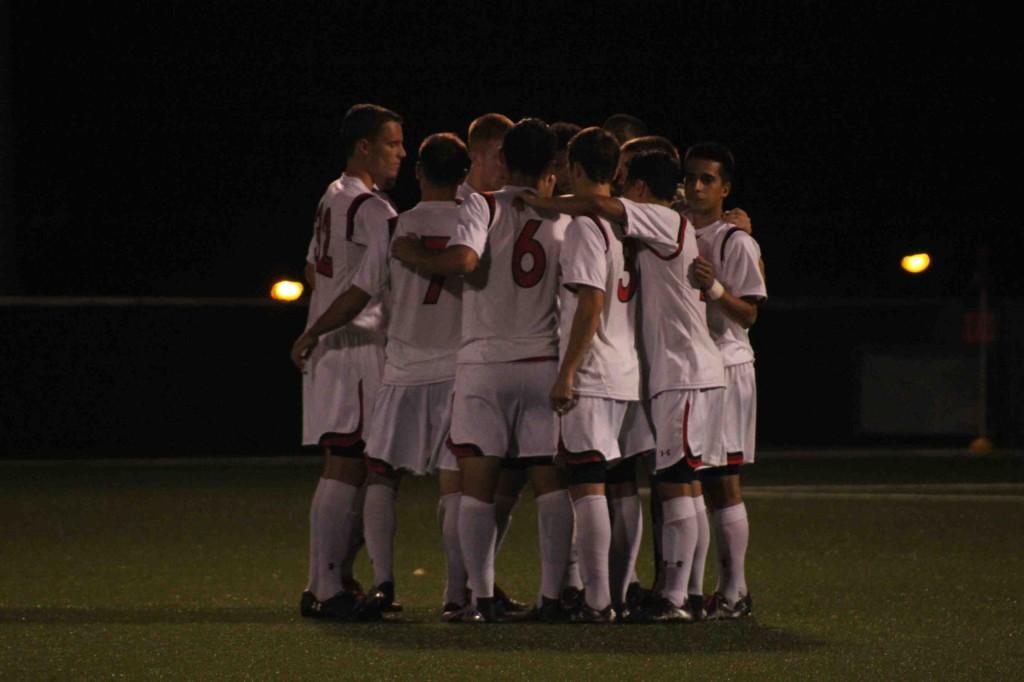 The Johnnies won on Saturday night despite playing a man down.

“[Diaz, Mulligan, Torres and Thomas] played an unbelievable part of our program: playing so many games and being leaders, working hard every day not only for themselves but for the team,” head coach Dr. Dave Masur said. “We’re pleased that we got a win on their last game here.”

Each player was escorted to the center of the pitch by family and friends, awarded a framed team portrait and embraced by coach Masur.

“It was very emotional,” Mulligan said. “We all put in a lot of effort into this program. It was definitely an emotional night and the team wanted to win for us.”

Both teams struggled to make an impact on the scoreboard with a rough first half. As tensions mounted nearing 45 minutes, the Red Storm and the Hoyas got into a scuffle outside Georgetown’s box. Sophomore Danny Bedoya received a yellow card while sophomore Sean Sepe was ejected from the game with a red card, forcing St. John’s to play the remainder of the game with a man down.

“It’s tough playing a man down but we were resilient enough to keep them out and we just defended really well,” Mulligan said.

The Red Storm broke free of the scoreless game in the 71 minute when Alvez stepped past the Hoyas’ defense to dribble it in the lower right post. This was the midfielder’s first career goal, which proved to be the decider.

“I thought [Miguel] came in here showing a lot of energy,” Masur said. “It was nice to see him show a little bit of speed and quality moving forward to get that goal.”

St. John’s stacked every player for the final 20 minutes against each Hoya and looked to contain a team that won their last three games by a combined score of 11-1.

Georgetown was able to find a crack in the Johnnies’ defense twice, but were rejected both times by Diaz. The senior keeper, in his final regular season game, finished with three saves and yet another shutout victory.

The Red Storm, who are ninth in the Big East play, slipped from the NSCAA Top 25 rankings after being ranked number seven in September. With a victory over No. 5 Georgetown, the Johnnies buffed their resume with the Big East tournament looming.

“This definitely builds our confidence and we got to work off it,” Mulligan said. “We were very unlucky in the middle part of our season and this is a good way to end.”

St. John’s will finish off their regular season when they travel to Seton Hall on Nov. 8.