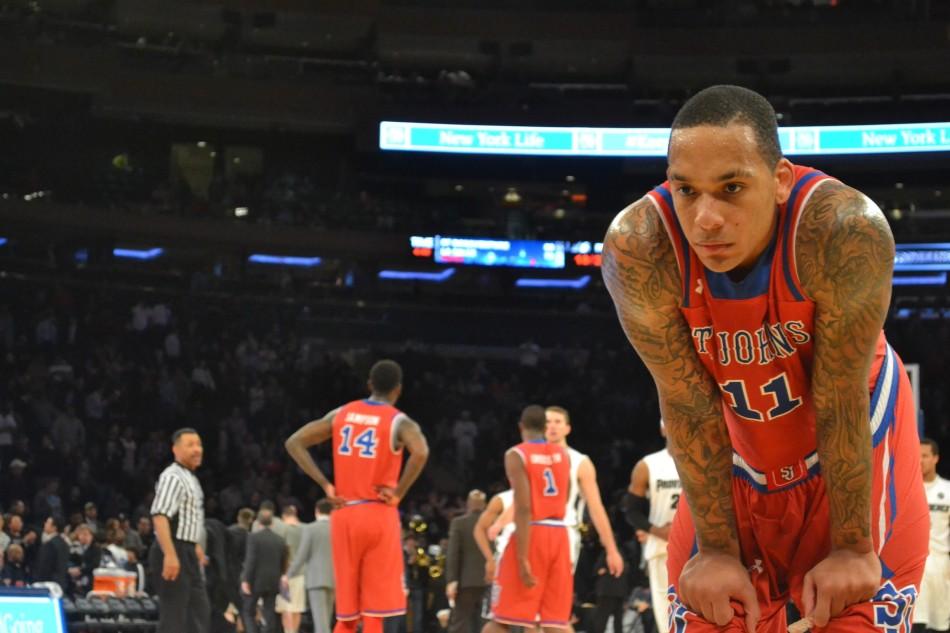 D'Angelo Harrison's late flurry of points wasn't enough to bring the Red Storm back from a 17-point deficit.

As time dwindled for the St. John’s men’s basketball team to complete a monumental comeback in the Big East Tournament quarterfinal, junior guard D’Angelo Harrison tried to send a shot from behind the arc that would have tied the game.

Instead, the ball was stopped after barely leaving his grasp and ended up in Providence’s possession like a ceremonial handover of the team’s place on the NCAA bubble. St. John’s fell 79-74 in what was dubbed by ESPN’s bracketology analyst as a “virtual play-in game.”

The Red Storm (20-12, 10-8) managed to claw back within one of what had been a 17-point deficit to put itself in position to save its NCAA tournament hopes, but a combination of Harrison’s failed attempt and a missed layup by sophomore forward JaKarr Sampson sealed their fate – one likely to include another appearance in the NIT.

The Johnnies successfully quieted star Friars guard Bryce Cotton, who shot 1-of-10 from the field and finished with 12 points, in the early going, but a combination of Josh Fortune’s game-leading 24 points and Providence’s advantage with second-chance points (17-12) proved to be too much.

“We shut down one of their best players, but it’s the Big East,” junior forward Sir’Dominic Pointer said. “When Fortune came on he hit a lot of shots.”

Shots were falling for St. John’s in the first half, but forward progress came to a halt early in the second stanza. Providence opened up a 13-point lead on an 11-4 run. Sampson, who scored nine of the team’s first 10 points, and freshman guard Rysheed Jordan, who dropped 14 in the first half were silenced.

Sophomore guard Jamal Branch picked up the slack and kept the Johnnies within striking distance scoring seven of his nine points right after the break. That’s when Harrison started to heat up with a flurry of baskets that brought St. John’s back into contention.

“Credit Providence for building that lead,” Harrison said. “If we hadn’t gotten down so much it would have been a different kind of ballgame with the rally we had at the end.”

The rally proved too much and the Red Storm saw their NCAA hopes slide into oblivion. It was also the third-straight year that the team exited the conference tournament in its first game.

“It hurts, but we [have to] play,” Pointer said. “We’re going somewhere this postseason, so we gotta keep playing.”

Harrison’s 21 points led the team, while Jordan had 17 and Sampson finished with 15 points. Senior center Orlando Sanchez led the rebounding effort with 12, while Harrison was right behind him with 10.

Sophomore center Chris Obekpa, who started the game, only saw two minutes of action. Lavin said he sat the shot-blocker because of foul trouble.

After Fortune’s 24 for the Friars, LaDontae Henton had 16 and Kadeem Batts scored 13 points with 12 rebounds.

With postseason tournament selections looming, Branch said the goal is still to win a trophy.

“NCAA or NIT we’re still going to try to win a championship,” he said.