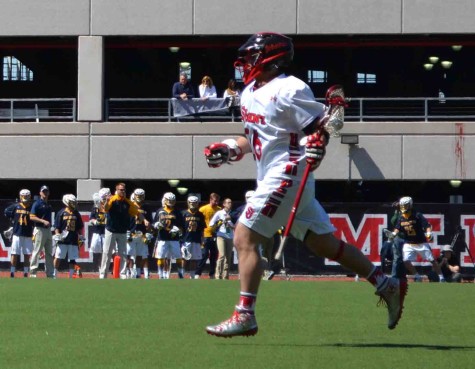 The St. John’s lacrosse team dropped a heartbreaker Sunday afternoon, losing to Big East opponent Marquette 11-10 in double overtime.  The Red Storm had a stretch of three weeks where they didn’t lose a game. But with Sunday’s loss, they’ve dropped two conference games in a row.

St. John’s (6-5, 2-2) struggled to score all game and never held a lead.  Despite their struggles offensively, the Red Storm charged back late scoring three goals in the final six minutes of regulation to tie the score at 10-10, sending the game into overtime.  After a scoreless first overtime period, Marquette’s (4-7, 2-1) freshman midfielder Andy DeMichiei netted the game winning goal giving the Red Storm their second straight loss.

St. John’s found themselves heading into the locker room trailing 4-3 at halftime.  Marquette came out in the second half on fire, scoring two goals in the first three minutes of the third quarter.  The Red Storm’s hopes of a victory seemed lost heading into the fourth quarter but after a late timeout by head coach Jason Miller, the momentum shifted in favor of the Red Storm. But their late surge wasn’t enough, as they eventually lost the match.

The Golden Eagles did a great job shutting down St. John’s senior attackman Kieran McArdle, who is the program leader in points, goals and assists. McArdle was held scoreless for the first time this season.

“Give Marquette credit,” Miller said.  “They were obviously going to make other guys beat them besides Kevin [Cernuto] and Kieran [McArdle] and they did a good job with that.”

With their top player struggling to find the back of the net, St. John’s showed that other players could carry the load.  The Red Storm showed a balanced attack with four players finishing the game with two-plus goals, led by senior attackman Colin Keegan who came away with a game-high 4 goals and 2 assists.  Sophomore midfielder James Bonanno, senior attackman Kevin Cernuto and senior midfielder Ryan Fitzgerald all scored 2 goals apiece.

“I think we have guys that are capable of doing that. They should be doing it every time out,” Miller said.  Colin Keegan added, “It’s good to have guys pick us up when we need it.  It’s good to get that production from them.”

The Red Storm has had a great taste of home-cooking, but Sunday’s loss was their first at DaSilva Memorial Field this season.

St. John’s will try to avoid their first three-game losing streak this season when they hit the road to take on Big East opponent Denver on Saturday April 12 at 4:30 p.m.