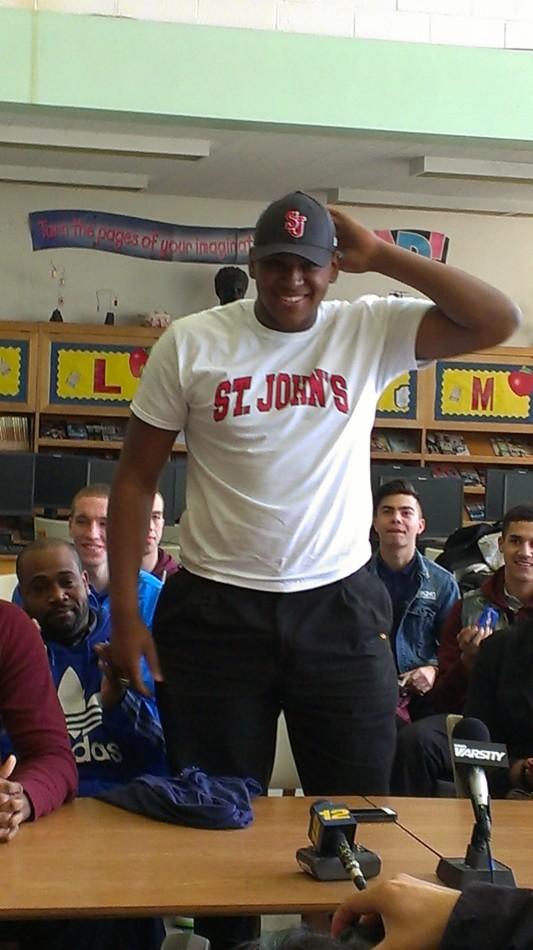 The St. John’s men’s basketball team was finally able to add a player to their roster after so many subtractions in recent weeks. Local product Adonis Delarosa of Christ the King announced Wednesday afternoon in a press conference in the crowded library of his future alma mater his intentions of playing for the Red Storm.

Delarosa made the announcement in dramatic fashion before a crowd that included members of the media. He revealed his college choice by unveiling a St. John’s tee-shirt that he had been wearing under his Christ the King shirt.

The 6-foot-11 Delarosa is a much needed post presence for St. John’s as they lost two of their best post players in Chris Obekpa and JaKarr Sampson in the last two weeks. Delarosa is definitely confident is his ability to fill the void both players left: “Last year they didn’t have an inside presence that could score,” Delarosa said “They will definitely have one next year with me on the team.” Delarosa averaged 12 points per game and 12 rebounds per game in his senior season at Christ the King.

Delarosa believes he will feel at home at St. John’s in part because his brother Joey has recently transferred to St. John’s from Florida International University. Both of the brothers have a good chance at seeing minutes in the Red Storm front court.

Delarosa added that he was “shocked” when Chris Obekpa decided to transfer, but Obekpa’s decision didn’t change his mind about attending St. John’s. “The players make the school,” Delarosa said. “ The school doesn’t make the player.”

Only time will tell of how big Adonis Delarosa’s impact will be. But this commitment was certainly one the Johnnies desperately needed.