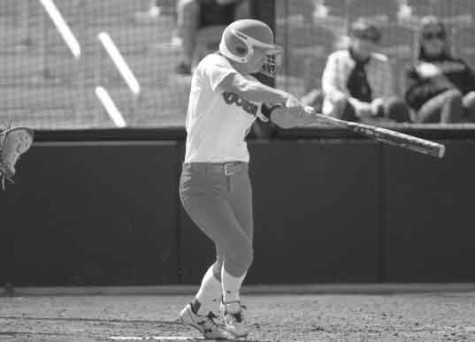 The St. John’s women’s softball team stayed hot to start the weekend as they won their second consecutive conference series, taking two out of three wins from the Friars in Providence.

St. John’s (20-19, 5-6 Big East) took the first two games of the series from Providence (4-22, 2-9 Big East) before surrendering the final contest on Sunday. Being that the Johnnies dominated the second game 12-3 and were silenced in the final game 8-0, the first game of the series proved to be the most dramatic.

The score was tied at zero going into the seventh, thanks to a one-hit, 12-strikeout performance by Tori Free. It was in the top of the inning when junior right fielder Ellen Czuba broke the silence with a two-out, two-RBI single up the middle that would prove to be the game winner for the Johnnies.

“The bottom of the lineup did a good job of getting on base for us,” Czuba said. “I was just confident going into my last at-bat that I was going to get a hit.”

The bats stayed hot rolling into game two, as Czuba led off the game with a single before junior catcher Erin Burner sent a home run over the centerfield wall to put the Johnnies up 2-0. After that, there was no looking back as St. John’s went on to collect 12 hits to match their 12 runs, including 2-for-3 performances by Brittany Garcia, Monique Landini and Yvonne Rericha. Rericha hit her first collegiate home run with a two-run shot in the fifth. Burner finished the day with 4 RBI, including a two-out, two-RBI single in the second. Over the first two games, St. John’s collected 20 hits as a team.

The story was much different in the series finale, however, as the Johnnies’ bats were hushed to just two hits. The Friars had an early lead with 3-0 in the first inning, but the damage was really done in the fourth when McKall Miller capped off a five-run inning with a three-run homer for Providence.

A bright spot on an otherwise dull Sunday afternoon for the Red Storm came before the game when head coach Amy Kvilhaug was honored with the ceremonial first pitch for her time spent as a Friar. Over her career at Providence she became the all-time leader in starts (92), wins (72), innings pitched (700.2), complete games (84), shutouts (27), and ERA (1.20) en route to leading the Friars to the 1994 Big East Championship.

“I would love to thank Providence College softball and Coach Kerri Jacklets for the wonderful gesture of honoring our 1994 Big East Championship team,” Kvilhaug said. “That championship was one of the most memorable moments of my life and I would love to thank and congratulate my former teammates… Without them, there is no way I would’ve had so much success.”

The Lady Johnnies will bring their series win along with their winning coach back home to face Seton Hall on April 17.