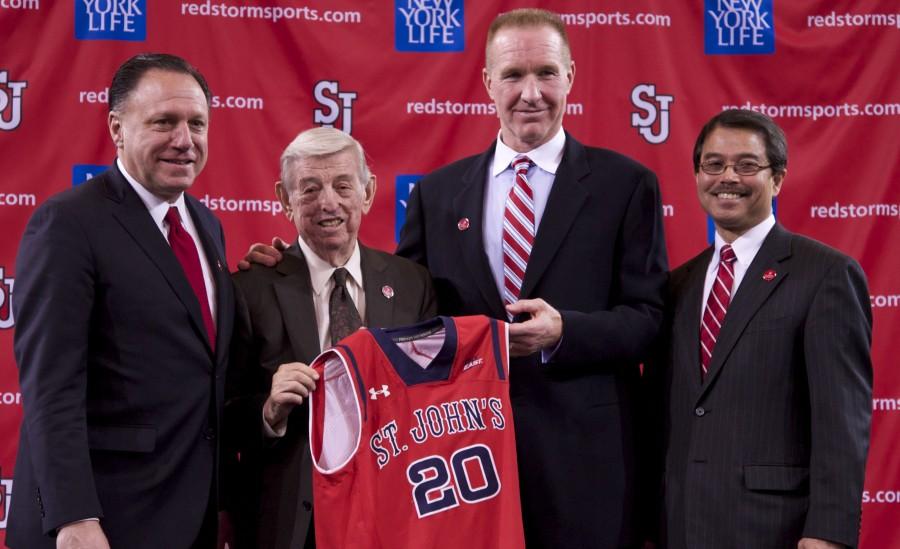 Mullin, a three-time Big East Player of the Year (1983-1985), the all-time scoring leader in St. John’s history with 2,440 points, a five-time NBA All-Star and Naismith Hall of Famer, will try to lead the Red Storm to the same type of success the program had during his St. John’s days, widely considered the glory days of St. John’s basketball.

“Wow, it’s great to be home,” Mullin said. “It’s only been 30 years, but really I never left. It’s a surreal moment, St. John’s University has meant so much to me and my family, when this opportunity was presented to me I couldn’t turn it down. I feel obligated to give back; I’m going to work hard to be the best basketball coach I can be and win as many games as possible.”

University President Dr. Gempesaw expressed his delight at Mullin accepting the job. “One thing I noticed was his love for the University. I would like to surround myself with people like Chris,” Gempesaw said.

After having a successful NBA career and working in NBA front offices for over a decade, the 51-year old Mullin believes his basketball experience will help prepare him to excel as a first-time coach.

Even though Mullin is a first time coach, he will command a certain level of respect that no other head coach in the nation can command. Mullin played under the bright lights and scrutiny of New York and he thrived, something that is invaluable to any players that he will recruit.

He knows what basketball means to the University and he is going to hold the student-athletes accountable for their actions and, because Mullin himself was a so-called “gym rat,” he is going to push these players to make sure they are the best they can be.

“St. John’s University has tremendous history and tradition. It’s not a jersey that is just handed to anybody, you have to earn it,” Mullin said. “I’m going to get a team and a bunch of players that are going to be proud win, lose, or draw. The way we win, the way we lose is going to be first class.

Mullin has also kept in contact with his head coach from his collegiate days, St. John’s legend Lou Carnesecca, who Mullin has known since he was 11.

“It’s a glorious day,” Carnesecca said. “I can’t tell you how I feel about it, but I think everyone on the East Coast feels the same way, and maybe even around the country. I don’t have to talk about what he has done, but there is one thing I want to say. I know he will make us proud.”

“Coach [Lou] Carnesecca was my college coach,” Mullin said.  I met him when I was 11 years old. There isn’t a day that goes by where one of the lessons he taught me doesn’t come up in my head. I always reflect back on my days at St. John’s. A lot of times, the way Coach [Carnesecca] handled losses stuck out to me more than the way he handled his wins.

“He taught me so much on how to conduct yourself as a professional. My job now is to pass it on to my players so they can pass it on to someone else,” Mullin said.

In his first few days on the job Mullin has already made his presence felt by hiring former Iowa State assistant Matt Abdelmassih, a former St. John’s student manager, as part of his staff.

Abdelmassih played a big role in the success for Iowa State’s head coach Fred Hoiberg, who also had no former coaching experience before taking the job as the head man for the Cyclones. In an identical scenario, Hoiberg is recognized as Iowa State’s best player in the program’s history, leading his team to four NCAA Tournament Appearances in his five years as head coach.

Mullin will look to accomplish similar feats with St. John’s.

Along with Abdelmassih, Mullin will be adding to his staff over the coming weeks,and will have to ensure he has a veteran coaching staff that will be able to help him along the way with the growing pains of being a first year coach.

Mullin has never recruited before either, and that will be something he will certainly have to learn on the fly in order to get immediate success and put a winning product on the floor.

“Recruiting is right away, as soon as this press conference is over, it starts,” Mullin said. “The history here at St. John’s, we’ve always been strong in New York City, and I guarantee you you’ll see me in public school gyms, Catholic schools gyms, the AAU gyms all over New York City.

“You don’t have to tell me where they are; I played in all of them. I know how to get in the back doors. I think it’s really important that we dominate New York. If there is a good player in New York City, he needs to come to St. John’s,” Mullin said.

As the most celebrated and perhaps the most influential figure in St. John’s athletics history, the New York hardwood icon will look to lead the program back to the top of the mount and it starts right now.