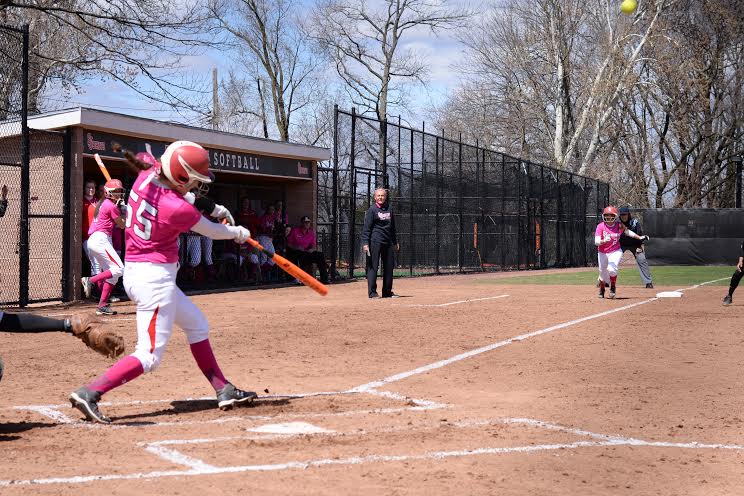 This past week, the St. John’s softball team beat Providence back-to-back gaining nine consecutive conference games overall. Up to this point, they are the only team that is undefeated in the Big East this season.

In the first game of a double-header on Saturday versus Providence, senior pitcher Francesca Carrullo did an excellent job of  holding the Friars’ offense at bay and only allowing three hits in a complete game shutout. In the bottom of the fifth, senior catcher Erin Burner hit a three-run home run, which granted St. John’s (17-13, 9-0) a 6-0 lead and sealed the victory.

As they started off their second game for the day, the Friars were the first to get on base, but the Red Storm took advantage of four hits and  a Providence error as they scored the first three runs of the game. Freshman Hannah Anderson scored another run for SJU on a Providence error with a three-RBI triple into the gap in the second inning.  In the fourth inning, the Red Storm got out to a huge lead, thanks to a pinch-hit grand slam by junior Carly Williams.

“That was awesome,” head coach Amy Kvilhaug said. “Carly works very hard at her craft of hitting so it was nice to see her have something very exciting to show for it. I thought it was one of the huge keys to our win as well as the future of our series.  It allowed our pitcher to throw less pitches and put the game just about out of reach for Providence.”

On Sunday, the final day of the series,  St. John’s finished with an 11-1 win, due to  Burner’s grand slam in the first-inning, which was a perfect start of the game. Carrullo held down the Providence’s offense to only 2 hits in five innings total. Freshman Krystal Puga walked to load the bases,  setting  Burner up for her 40th home run of her career. The Red Storm offense was uncontrollable for Providence as the Red Storm cruised to victory.

“Providence was another stepping stone for us on the way to our ultimate team goal of a Big East Championship.  They were a solid team with some very good players and I thought we did a great job executing our game plan in all aspects: defensive, pitching and hitting,” coach Kvilhaug said.

This upcoming weekend, St. John’s softball will take on Seton Hall in a three-game series.