Mullin recruiting up a storm 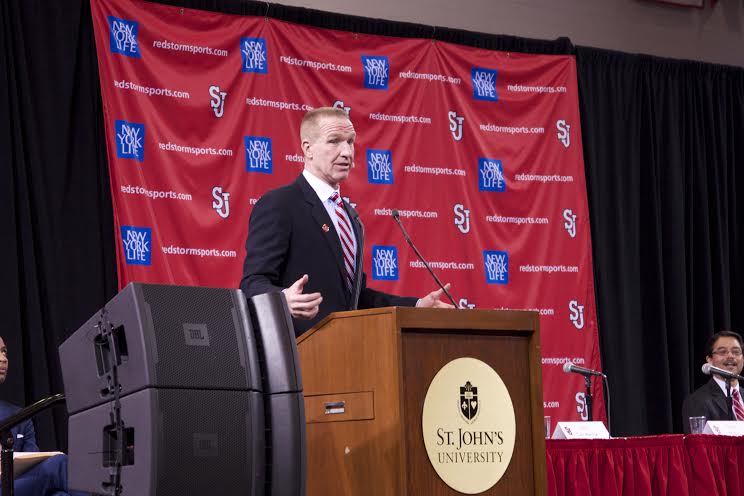 Two weeks ago, when Chris Mullin was introduced as the 20th men’s basketball head coach, he made a promise to the fans and the media in attendance: the recruiting process would start immediately after the press conference for himself and newly hired assistant Matt Abdelmassih.

He wasn’t lying, to say the least.

Since the April 1 induction, Mullin, Abdelmassih and Mullin’s brother, Terrence Mullin (not on the coaching staff but it looks likely that Mullin could hire him soon), hit the recruiting trail with a fast and furious approach. Especially targeting players in NY.

“Recruiting is right away, as soon as this press conference is over, it starts,” Mullin said at the press conference. “The history here at St. John’s, we’ve always been strong in New York City, and I guarantee you you’ll see me in public school gyms, Catholic schools gyms, the AAU gyms all over New York City. You don’t have to tell me where they are. I played in all of them. I know how to get in the back doors. I think it’s really important that we dominate New York. If there is a good player in New York City, he needs to come to St. John’s.”

St. John’s scholarship offers at this point include a long list of names that are nationally and internationally regarded, most right in the school’s backyard.

Some of the names include:

Brandon Sampson, a 6’4” guard from Louisiana, was St. John’s top recruit before decommitting when Steve Lavin mutually parted ways with the university. Mullin and Abdelmassih went down to Louisiana to visit Sampson on April 9 in hopes of getting him to recommit. If they can get him to come to St. John’s, that will be a huge pickup for the Red Storm.

In his two weeks on the job, Mullin has also done some impressive work in obtaining student-athlete transfers. He first landed University of Tennessee transfer Tariq Owens. Owens, a 6’10” forward, played one season at Tennessee and will have to sit out a season because of NCAA reguations.  However, Owens has three years of eligibility remaining and will have time to work on his game over the next year.

Mullin was also able to scoop up junior college transfer Darien Williams, a 6’8” forward from Iowa Western Community College. Williams originally intended to go to Iowa State; but, because of a close relationship with Abdelmassih, a former Iowa State assistant and his recruiter, Williams changed his mind and picked St. John’s. Williams is a tremendous athlete and scoring force and will be eligible immediately to play.

The Red Storm also received some good news from two players on last year’s squad. Sophomore guard Rysheed Jordan announced through his Twitter account on Tuesday night that he will return for his junior season. Reports have indicated that junior forward Chris Obekpa will return for his senior season. If the reports are true and Obekpa comes back to join Jordan, they will provide veteran leadership to a very young Johnnies roster and may even lead them into contention in the Big East.

Mullin’s coaching staff and recruiting presence got much stronger as Barry “Slice” Rohrssen, a close friend of Mullin’s and a Brooklyn native, agreed to become a member of the staff. Rohrssen was an assistant at Kentucky prior to coming to St. John’s and has strong recruiting ties in NYC, something that will increase the chances of the Red Storm gaining local talent.

Mullin and St. John’s have a long road ahead before next year’s roster is close to being complete. Yet, if Mullin and his staff’s first two weeks are any indication of their tenacity for recruiting, St. John’s is going to attract talent from all over the nation.